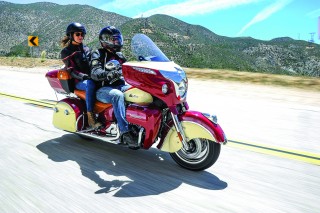 Originally produced from 1947-1953, the Indian Roadmaster was widely recognised as one of America’s most reliable and comfortable touring bikes, and the all-new 2015 Roadmaster is destined to reclaim that honour. In keeping with its legendary namesake, the Roadmaster comes fully-loaded with premium features for comfort and convenience. Roadmaster is the ultimate statement motorcycle, a long distance tourer unmatched in luxury, featuring expansive storage capacity, class leading power and performance.

“It has truly been a privilege and an honour for our team to be a part of motorcycling history in designing and reintroducing the Roadmaster, which has such a legendary reputation as the king of luxury touring bikes,” said Steve Menneto, VP of Motorcycles for Polaris Industries. “The quality, craftsmanship, performance and standard feature set on this bike is simply unmatched in the luxury touring segment, and we look forward to sharing the 2015 Roadmaster and other exciting announcements with the global motorcycling community beginning August 2nd in Sturgis.”

COMFORT & CONVENIENCE BY DESIGN
The new Roadmaster was built from ground up for all-day touring comfort for rider and pillion, taking American luxury and comfort to a whole new level. It offers:

PROVEN POWER AND ENDLESS CHROME
Indian Motorcycle’s new flagship luxury touring bike is powered by the awe-inspiring and proven Thunder Stroke 111 engine, a 49-degree, air-cooled V-twin power plant mated to a 6-speed overdrive transmission. The Roadmaster is dripping in standard chrome, including the forks, trunk rack, front and rear highway bars, fender tips, and many other chrome components and trim that are options on other brands.

The 2015 Roadmaster will be on display at European Bike Week, held annually at Faak Am See, Austria, between 2-7 September.

Roadmaster in 'Indian Motorcyle Red and Ivory Cream'
12
Add All