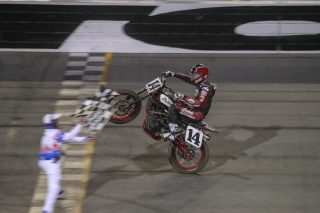 The highly-anticipated AFT season opener was action-packed, with Bauman taking an aggressive lead early in the Main and forging a considerable gap between himself and the rest of the field. Indian Motorcycle Privateer Henry Wiles (Bandit Industries, DPC Racing, Wilco Racing Indian FTR750) battled his way into second place, but was unable to track down Bauman.

“Briar had an impressive finish to the 2018 season as an Indian privateer aboard the FTR750,” said Gary Gray, Vice President – Racing, Technology & Service for Indian Motorcycle. “He and his crew put in an extensive amount of time and preparation during the off-season, so we’re extremely proud to see him find success this early in the season.”

Fellow Wrecking Crew rider Bronson Bauman raced to a fifth-place finish, while the back-to-back reigning Grand National Champion Jared Mees salvaged a Main event qualifier after uncharacteristically hitting the dirt twice during the Semi. Mees made a strong push early in the Main and was running in fifth, until a mechanical issue ended his night early.

The second race of the season kicks off next weekend with the Atlanta Short Track at Dixie Speedway on March 24.