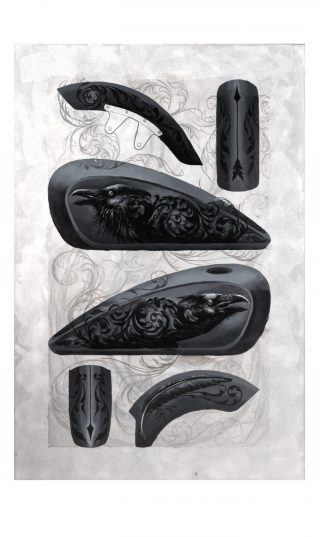 Carlos Torres’ monotone masterpiece takes the all-new Indian Chief Darkhorse into the stylised world of ‘Black and Grey’ fine art tattoos.
The third of three headline artists work to be revealed in CGI as part of the ‘Indian Motorcycle X No Regrets’ tattoo art collaboration.

Indian Motorcycle® unveil the third of three unique tattoo inspired designs, created by three iconic featured tattoo artists – Mayonaize, Shige and now Carlos Torres – whose Indian Motorcycle® Chief based works of art have each been revealed in high-resolution computer-generated imagery over the past three months.

Working from his tattoo studio and fine art gallery, The Raven and The Wolves in Long Beach California, Carlos Torres is internationally renowned for his highly skilled tattoos and critically acclaimed, highly collectable fine art in oils, black and grey realism and surrealism. Since starting tattooing as a self-taught teenager in 1995, Carlos has become one of the most highly awarded artists in the tattoo industry over the past two decades.

Carlos approached the artwork for the Indian Motorcycle® Chief with his vision of the freedom motorcycle riders experience and the comparisons with flight. The Chief Darkhorse in his design features his trademark realism with a highly detailed black and grey image of a Raven wrapping around the fuel tank and stylised feather and filigree motif subtly flowing across both front and rear fenders to accentuate the movement of the machine and its sculpted bodywork.

Commenting on his design process Carlos said “The difficult part was trying to design something that’s going to move around the motorcycle with contour changes and make it become part of the bike, so that presented a pretty big challenge. The idea of my design on an Indian Motorcycle® is pretty cool, I didn’t ever think that would happen.”

Carlos’s design will be applied to a real Indian Motorcycle® Chief later this year and revealed in the metal at a VIP event in London in Spring 2022, alongside designs from artists Mayonaize and Shige. Forty more of the world’s leading tattoo artists will all compete to have their Indian Motorcycle® Chief designs made a reality in steel and paint later this Autumn by public vote.

Alongside the three ‘Art-Bikes’ designed by the three featured artists, Indian Motorcycle® and No Regrets are offering the chance for riders to win a dream tattoo.

By registering for a test ride online riders could win a tattoo of their choice, in a two-day studio session compliments of No Regrets & Indian Motorcycle®, valued at €6000.

About No Regrets
No Regrets is a global leader in the tattoo industry having established a group of luxury studios based in the UK. Since opening their first Cheltenham studio in 2008, owner Ben Lakin has launched multiple successful studios in London, Bristol and Exeter. Over the last decade, No Regrets has carved out a reputation for pushing boundaries and challenging stereotypes within the industry. Their studio spaces are brimming with thought provoking artwork and high-end décor. As well as attracting guest artists from around the world, No Regrets is home to award-winning resident artists who are constantly expanding their styles and expanding a network of clients who covet their work.

ABOUT INDIAN MOTORCYCLE®
Indian Motorcycle® is America’s first motorcycle company. Founded in 1901, Indian Motorcycle® has won the hearts of motorcyclists around the world and earned distinction as one of America’s most legendary and iconic brands through unrivalled racing dominance, engineering prowess and countless innovations and industry firsts. Today that heritage and passion are reignited under new brand stewardship. To learn more, please visit. To learn more, please visit www.indianmotorcycle.eu

INDIAN and INDIAN MOTORCYCLE® are registered trademarks of Indian Motorcycle International, LLC. Always wear a helmet, protective clothing and eyewear and insist your passenger does the same. Ride within the limits of the law and your own abilities. Read, understand, and follow your owner’s manual. Never ride under the influence of drugs or alcohol.