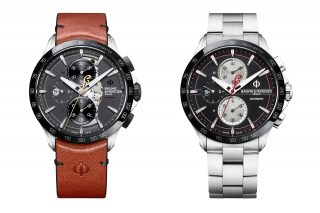 One is inspired by the iconic Indian Scout and the other by the Indian Chief, with each limited to 1,901 pieces representing the year 1901 when Indian was founded.

Alexandre Peraldi, Baume & Mercier’s Design Director worked closely with Indian’s Industrial Design (ID) team based in Minnesota, USA to create these two new timepieces. The aim was to capture the DNA of Indian in a refined and not obvious manner.

Inspired by the rich history of Indian Motorcycle Company and reflecting the best in micro-mechanical achievement, these Clifton Club Indian Legend timepieces exemplify the brand’s marriage of high-precision timekeeping and masculine sporting elegance. Housed within a 44mm polished & satin-finished stainless steel case with ADLC details and operating at a frequency of 28,800 vph, both are powered by the self-winding caliber (Valjoux 7750) offering a 48-hour power reserve.

The riveted indexes and the hour and minute marks are coated with green emission Superluminova®. In addition there is a tachymeter, date and chronograph functions and the counterweight hand is immediately recognisable with the ‘I’ from the Indian logo.

The date disc displays ‘1901’ at the 19th day of the month to represent Indian Motorcycle’s founding date. The Indian logo is also engraved on the screw down case back. The Clifton Club Scout (below) features a face design that represents the bike’s V-twin engine and the richly toned leather strap mimics the brown colour of the Scout’s saddle and is made by the Horween Leather Company renowned for crafting calfskin straps that develop character and patina over time. Meanwhile, the Clifton Club Chief (below) is fitted with a 3-row polished and satin-finished stainless steel bracelet secured with a triple folding-clasp. Alain Zimmermann, CEO of Baume & Mercier said: “Sharing special moments, living a variety of experiences, being animated by an enduring passion that makes us push our limits beyond the conventional is what enriches our lives. For Baume & Mercier, time is far more than a sequence of seconds, minutes and hours. It is punctuated by rare moments that count. These two new exceptional Limited Edition timepieces, imbued with Indian’s spirit, translate this idea of freedom, adventure, tenacity and visionary thinking.”

Steve Menneto, President of Motorcycles, said: “Storytelling has been a big part of Indian since its founding in 1901. What Hendee and Hedstrom did in moving out of pedal bikes into motorised bikes is an incredible story. Today we continue to tell that story and ones about famous riders who have owned an Indian Motorcycle over the past 116 years. I truly believe our heritage and the tales of what motorcyclists achieved in the past is helping Indian gain momentum and a new following of riders who want to live and create stories for themselves.”

Both unique timepieces transcend the iconic spirit of Indian Motorcycle, while featuring exceptional design and craftsmanship and will be presented within a special box with the colours of Indian.

The watches are not available from Indian Motorcycle dealerships, instead they’re on sale from Baume & Mercier stockists only.

The first co-branded timepiece was the Clifton Club Burt Munro tribute that was revealed at EICMA in November 2017. Read more here.