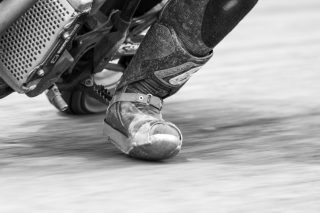 The MCN Festival of Motorcycling, held at Peterborough Arena, East of England Showground, played host to the Indian Motorcycle Flat Track Nationals last weekend with the flat track arena providing high octane entertainment right at the heart of the festival. Over 300 tonnes of new dirt had been added to the track and the venue was in prime condition for the event; yet unpredictable weather made for a frustrating start to the two days of racing with Saturdays Hooligan races cancelled due to consistent rain during the day.

Sundays Hooligan action more than made up it with heart-stopping moments as Indian Motorcycle’s Krazy Horse teammates Leah Tokelove and Lee Kirkpatrick battled bar to bar on their modified Scouts for position in the heat races. The Hooligan final saw a dominant performance from Gary Birtwistle leading from beginning to end although he was under constant pressure from Max Hunt. A red flag caused a restart from a line out and left Indian Scout rider Leah Tokelove having to fight her way back from fourth behind Grant Martin to take a well deserved third place, continuing her consistent podium streak.

The Pro-class line up at Peterborough included AFT National number 10 Johnny Lewis, who had been touring Europe for the past three weeks promoting the sport, performing exhibition displays on the world-beating Indian FTR750 and training local riders through his Moto Anatomy Flat Track schools.

Johnny lined up with some of the best riders in Europe to provide a heavy hitting line up for the pro-class event, with qualifying heats seeing the Spanish Team Greenfield rider Gerard Bailo set the fastest lap ahead of Lewis and fellow Spanish rider Ferran Sastre. By the time the competitors lined for the final, there were six riders who had really shown they had the ability to win. As the green light came on it was the American Lewis who took the holeshot followed by British rider Rob Mear. Sastre and Bailo worked their way up the field and headed towards Lewis. As the race headed towards the closing laps the top three riders were swapping places on each corner but a crash at the rear of the field caused a red flag and the race was stopped with three laps to go. The result was declared on lap twelve with Gerard Bailo taking the win.

Next up for the Hooligans will be the second round of the European Championship at El Rollo in Spain on the 15th June followed by round five of the Flat Track Nationals at Dirtquake in Eastbourne 10th August.

Editors Notes:
Hooligan class rules are simple to keep costs down and fabrication to a minimum. Riders must use a lightly modified street bike with 750cc+ multi-cylinder engines, no front brake and standard frame, fitted with Dunlop flat track tyres.

ABOUT THE DTRA
The Dirt Track Riders Association (DTRA) is run by riders and racers to promote European Flat Track racing. The series has grown year on year and is gaining popularity with riders from all disciplines of motorcycle sport from Rookie riders to Pro racers. Racing classes mean racing is open to many different levels of riders and types of bike. The DTRA has been instrumental in growing all forms of Dirt Track Racing outside of the USA and the UK scene has grown to become the largest outside of North America. To find out more visit www.dirttrackriders.co.uk