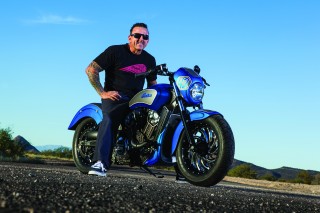 Dirty Bird Concepts owner, John Shope, was fired up about the project as soon as he saw the new motorcycle revealed at the Black Hills Rally in Sturgis SD earlier this year.

He has called the final customised bike the “Scout 42”.

John Shope has been featured on The History Channel’s Biker Battleground and in over 40 magazines, and is the winner of both the Chopper Challenge on CMT, and the 2014 Hot Bike Power Tour.

“Dirty Bird is well known for our custom baggers,” says Shope who co-starred in the television show Biker Battle Ground Phoenix, “So when I saw the new Scout I knew it was going to be a real player on the market – and when I had a chance to ride it – I was totally blown away by how great the engine and handling is.”

Shope’s custom reflects the sporting heritage of the Indian Scout. Known for its balance of chassis and power, the history of the Scout model name is framed by racing wins, world records and performances on the fabled “Wall of Death”.

The custom work on “Scout 42” was done to increase the sport appeal of the motorcycle, without sacrificing the highly praised handling of the stock bike.

From a design standpoint the front of the motorcycle received the most attention. A custom fairing and chin spoiler bring a sportbike aesthetic to the Scout. While the footpeg location remains stock, “Bear Claw” pegs were mounted for increased boot traction, a Renthal handlebar pulls the rider forward into an aggressive stance and for more weight on the front end. A new chin spoiler changes the lines around the stock radiator and front frame member. A custom front fender compliments the tighter look. Shope developed a series of frame inserts to add additional details to the otherwise stock cast aluminum frame.

Shope chose to stick with the stock rim sizes to maintain handling, however custom rims were ordered up through Gorby Machine and the stock tires re-mounted. The stock shocks were custom powdercoated, as were many other details on the motorcycle. The forks remain stock, however the seat was covered in a diamond pattern suede by Guy’s Upholstery.

Shope’s favorite part of the build is the fairing. “That really set the attitude for this bike – it’s really going to annihilate the competition.” Interestingly, Shope decided to leave the stock tank alone. “The designers knocked it out of the park. That’s the most bad-ass stock tank ever, I just love the shape.”

Paintwork by Steel Vision Garage in a candy blue with tape fading style and gray inserts is complimented by a darkened tail light, and a blue tinted instrument pod. Other details catch the eye such as a side-mount license plate and drilled out levers, chain guide and sprocket cover plus a tight and reconfigured exhaust system that according to an ever-enthusiastic Shope; “Sounds really nasty!’

Shope is excited about the potential for customising the Indian Scout. “We have done a few Indian baggers, and those are great projects, but the Scout comes at such an awesome price point, and lots of parts simply bolt on and off, so it’s exciting to think about future even more radical builds.”

Log on to www.dirtybirdconcepts.com to see more custom Indian Motorcycles built by John and his crew.

The Dirty Bird Concepts “Scout 42” will be on display in the Indian Motorcycle Display through the end of the International Motorcycle Shows tour. To learn more, log on to www.motorcycleshows.com.

The 2015 Scout is the first truly new Indian Scout in over 70 years, yet its design pays homage to the legendary early Scouts that conquered the infamous “Wall of Death” and notched countless innovations, racing wins, world records and industry firsts along the way. A 1920 Indian Scout earned the title of the “World’s Fastest Indian” at the hands of Burt Munro in 1967. The new Scout is powered by an all-new, 1133cc, 100hp V-twin engine that combines the design, performance and reliability elements that made the original Scouts unstoppable and combines it with cutting edge technologies and industry-leading engineering for unparalleled durability and reliability.