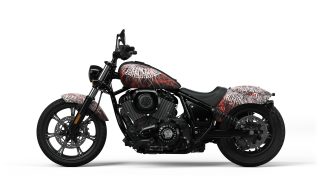 Internationally renowned tattoo artist Mayonaize makes his mark on the all-new Indian Motorcycle Chief.
The first of three headline artist’s work to be revealed in CGI as part of the ‘Indian Motorcycle X No Regrets’ tattoo art collaboration.

Indian Motorcycle unveil the first of three unique tattoo inspired designs, created by three iconic featured tattoo artists – Mayonaize, Shige and Carlos Torres – whose Indian Motorcycle Chief based works of art will each be revealed in high-resolution computer-generated imagery over the next three months.

Mayonaize, or mayo, is a New Zealand born artist living and working in Melbourne, Australia, who is known for bold, calligraphic script designs with a unique visual style. Mayo’s work is highly sought-after, not only as a tattooist, but also as a notable painter, his portfolio of exhibited artworks ranging from street art to interior canvases and large-scale murals.

Mayo hand painted his Chief design onto large scale templates before being photographed and rendered onto the tank and fenders to his exact specifications.

Mayonaize commented on the design process “I think the most interesting part is the way that all the panels fit together on the bike. I love the machining of the bike as well, so I was really interested in hero-ing that. You don’t want to just do something that’s not related to the flow of the bike, there’s lines to a bike like there’s lines and flow to a body – the focal point of the bike would be the tank and the engine beneath, so you want to hero the parts of the body that are the most interesting, the motorcycle creates the composition for the piece rather than just trying to put a flat image on each panel. I wanted it to look like it was one piece over the whole bike.”

Mayonaize’s design will be applied to a real Indian Motorcycle Chief later this year and revealed in the metal at a VIP event in London in Spring 2022, alongside designs from artists Shige and Carlos Torres. Forty more of the world’s leading tattoo artists will all compete to have their Indian Motorcycle Chief designs made a reality in steel and paint later this Autumn by public vote.

About No Regrets
No Regrets is a global leader in the tattoo industry having established a group of luxury studios based in the UK. Since opening their first Cheltenham studio in 2008, owner Ben Lakin has launched multiple successful studios in London, Bristol and Exeter. Over the last decade, No Regrets has carved out a reputation for pushing boundaries and challenging stereotypes within the industry. Their studio spaces are brimming with thought provoking artwork and high-end décor. As well as attracting guest artists from around the world, No Regrets is home to award-winning resident artists who are constantly expanding their styles and expanding a network of clients who covet their work.

Mayonaize - Design and Creation Add All