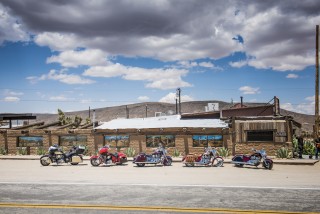 Indian Motorcycle is excited to announce its 2017 model year (MY17) line-up for the Europe, Middle East and Africa (EMEA) region.

The headline news is the addition of the new touchscreen infotainment system called ‘Ride Command’ to the Chieftain and the Roadmaster (comes as standard).

Scout Sixty can now be modified to be A2 licence compliant.

And the existing line-up is now available in previously-never-seen-before colour schemes.

In Indian’s ‘mid-size segment’, the Scout Sixty and the Scout have both had technical updates, namely: Ride Command is a new 7 inch touchscreen that’s integrated as standard into the dash of the 2017 Roadmaster and Chieftain models. It has the best display in the industry, is the easiest to use and has customisable split-screens.

Indian Motorcycle’s marketing director, Reid Wilson says: “We’ve put considerable time and effort in to developing this touchscreen system and we know that riders are going to seriously impressed by the way they can customise screens with the information that’s important to them. Not only will they be able to get to where they want more safely and with more confidence, they’ll be able to do this while making the most of Ride Command’s ability to link up to their smartphone to listen to music or take a call.”

At 7 inches, Ride Command is the largest infotainment display in the industry with the highest resolution (800 x 480 pixels), the brightest screen (twice as bright as some of the brightest smart phones on the market) and the fastest response time (ready in 10 seconds following key-on activation). Ride Command links up through Indian Motorcycle’s premium audio system (100 watts on Chieftain and 200 watts on Roadmaster).

Offering an easy-to-read touchscreen located in close proximity to the rider, the Ride Command system offers the most intuitive infotainment interface on two wheels, with modes/shortcuts easily available (through five large push-buttons). The touchscreen has two-finger touch capabilities featuring a glove-accepting, pinch-to-zoom capability just like a smart phone.

Carrying a Bluetooth-enabled phone or headset? If you are, then Ride Command offers the easiest and fastest pairing to your device for quick, seamless integration into the touring experience.

Alternatively, use buttons located below the screen or on the handlebar that are both connected to the touchscreen display. Use the controls to manipulate audio controls, accept and reject phone calls and navigate through screens.

See the information you want the way you want it, when you want. Featuring more vehicle information than available in any system on two wheels, Ride Command can be customised to show eight different screen options that can be used in any combination. Choose from: Scout Sixty can now be made A2 licence compliant after feedback from dealerships throughout Europe that demand from young riders for Scout Sixty was high. Dealers can now fit a restricting kit before delivery to the customer. Colours remain the same as last year. The Chief Classic was previously only available in Pearl White last year, but it now comes in a new two-tone scheme – Burgundy Metallic over Thunder Black. The Chief Dark Horse remains the same as last year. Chieftain comes in five colours this year – two of them new. It also has the Ride Command touchscreen as standard. Remains the same as last year but won’t come with Ride Command like other Chieftain models do.

Roadmaster
There are five colours to choose from and all now come with Ride Command as standard.