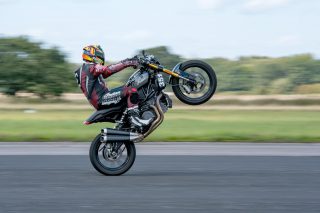 A tentative first outing at the Straightliners-run event that sees an eclectic mix of machines enter, including turbo charged machines that reach over 210mph on the back wheel, Bubba’s FTR 1200S was simply a production machine with the rear number plate hanger removed.

With a limited number of runs, due to other commitments for Bubba on his regular turbo-charged machine, the 2018 world champion completed his fastest 1 Mile Wheelie at 131.137mph on the FTR1200S, before going on to set two UK speed records in the process, recording a speed of 145.543mph to set the ‘Flying Start ¼ mile’ record and 145.613mph to secure the ‘Standing Start Mile’ record too – both in the production V-Twin up to 1350cc category.

Talking about the weekend, Bubba Myers, commented, “This has been a really positive introduction to the FTR. The bike was pretty much standard compared to everything else out there this weekend, so to set the speeds I did shows how much potential there is. The balance of the bike is really good, but I was most impressed by the engine; Its torque is really impressive and within just a couple of passes I was super comfortable with it. We’re pleased to begin the FTR’s story with some records in the bag too. A big thanks to Indian Motorcycle Company for the support, I hope we’re back next year.”

ABOUT THE WORLD WHEELIE CHAMPIONSHIPS

Riding on the back wheel for a kilometre at over 200mph is the goal of motorcycles bidding to be the wheelie world champion. This can be seen over and over again at the Straightliners Motorcycle World Wheelie Championship which takes place in England in mid-August. Up to 30 top competitors from the USA, UK, France, Holland and Ireland compete for the world title.