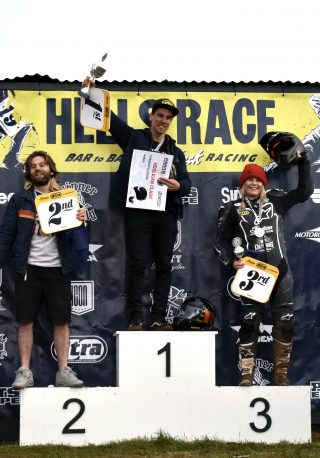 The Hooligan class battle did not disappoint at Hells Race. Racing was fast and tough on the soft light shale surface. The big bikes were hard to handle on the tight and deep short track, and rain during the afternoon made the racing really tricky. It was Gary Birtwistle who skilfully lead the final from beginning to end. After a poor start Max Hunt managed to race to a very well deserved second place. Leah Tokelove, who raced superbly in her heats on the Indian Scout took a well-earned third place on the podium, giving the UK first, second and third positions.

All three championship classes provided some amazing action and with riders from nine countries, the event had a truly international feel.

The Pro Class was packed with Europe’s top dirt track riders, with a large showing from the UK, coupled with a strong field of other top riders from the Spain, Netherlands, Italy and Poland. The heats provided really tight racing. It was Ferran Sastre who was the only rider to win all his heats and took first pick for the Pro Final. Sastre had some very strong competition from Maikel Dijkstra who was fresh from training with Moto Anatomy’s Johnny Lewis and was showing some excellent pace on his home track. Both Toby Hales (Greenfield Dirttrack) and Gerard Bailo (Greenfield Dirttrack) flew in from riding Copa Rodi in Spain the day before. Franc Sala was also racing well and taking heat wins. In the Pro final it was Ferran Sastre who raced with superb skill to win, with Maikel Dijkstra taking a very close second and Sala third giving the Spanish riders a strong presence on the podium.

The vintage Class had a massive entry with some really close racing on some of Europe’s most beautiful vintage machines. German rider Martin Huning was on fire in all his heats and won the finaI. In second place was DTRA Race Director Anthony Brown who was very strong in all his heats. And in third place was Swiss rider Michel Colaizzi.

Krazy Horse’s Hooligan Team return to continue their UK DTRA flat track championship attack with the Indian Scout at MCN’s Festival of Motorcycling, Peterborough Arena, on May 18th and 19th – Join the event and experience the spectacle of Flat Track racing alongside live demo ride opportunities, see the entire Indian Motorcycle range on display and enjoy all the festival has to offer.

ABOUT THE DTRA
The Dirt Track Riders Association (DTRA) is run by riders and racers to promote European Flat Track racing. The series has grown year on year and is gaining popularity with riders from all disciplines of motorcycle sport from Rookie riders to Pro racers. Racing classes mean racing is open to many different levels of riders and types of bike. The DTRA has been instrumental in growing all forms of Dirt Track Racing outside of the USA and the UK scene has grown to become the largest outside of North America. To find out more visit www.dirttrackriders.co.uk