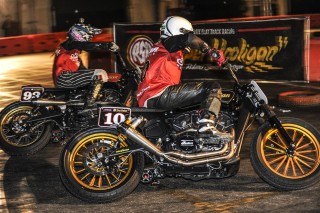 As Indian Motorcycle announced the world premiere of Scout Sixty at EICMA in Milan, the brand also announced that five modified Scout Sixty bikes would be racing on the flat track in a special ‘Super Hooligan’ class that very weekend.

The Roland Sands Design (RSD) Super Hooligan race presented by Indian Motorcycle took place at the Orleans Arena in Las Vegas on Saturday 21st November 2015 and was a super success.

RSD and Indian Motorcycle had previously approached the organisers of the Superprestigio of the Americas race to see if it could create a class of Super Hooligan races, sanctioned by the AMA Pro Flat Track.

Indian Motorcycle announced Scout Sixty at EICMA on the Wednesday and then on the Thursday night in the USA, the Super Hooligan Scout Sixty bikes were unveiled at a private party in a warehouse in San Pedro, Los Angeles on the eve of the USA’s Long Beach International Motorcycle show. There was live music, a hog roast and a display of past and present Indian Motorcycle models.

Roland and his crew then rode the Super Hooligan Scout Sixty bikes around an oval race track – the engine noise ripping and reverberating around the warehouse as the hooligans laid down rubber.  The five riders finished their act by being chased down by police bikes with sirens wailing. They wore striped tops – like what prisoners are given – all keeping in with the theme of being a ‘Hooligan’.

On the Saturday night in Vegas, a total of 28 riders competed in three heats in the Super Hooligan class on various makes of bikes. Five of the riders raced on Indian Scout Sixty bikes – Roland Sands (No.10), Drake McElroy (No.31), Travis Newbold (No.47), Brendon Lutes (No.23) and Aaron Colton (No.93).

The Super Hooligan racing was screened live on FANSCHOICE.TV and showed the world what flat track racing is all about. The entry rules are simple; bikes must be a minimum of a 750cc (twins, triples or fours) with a stock street chassis and able to be registered for use on the road.

It was See See Motorcycles’ Thor Drake (No.14) who won the final race. He was presented with a brand new Indian Scout Sixty as the prize. He then rode a lap around the track on the new bike in front of a cheering crowd.

All five of the RSD Scout Sixty riders made it in to the final, with Roland Sands finishing third and taking Indian Motorcycle to its first podium finish in AMA flat track in many years.

ABOUT HOOLIGAN RACING
Hooligan racing is traced back to the 1930s, at a time when the legendary Indian Motorcycle dealer Clarence “Pappy” Hoel began organising regional hill climb events and flat track motorcycle races in and around Sturgis, SD. Hoel was a founding member of the Jackpine Gypsies Motorcycle Club and he and the Gypsies are credited with starting the now world famous Sturgis Motorcycle Rally in 1938. Indian Motorcycle’s rich history in racing dates back to its inception with records in every racing category, including land speed, dirt track, transcontinental racing and at venues like Daytona and the Isle of Man TT. In 1911 the Federation of American Motorcyclists published the records for 126 different categories of racing and different distances and of those 126 racing records Indian Motorcycle owned all 126. Hooligan racing is a throwback to post-war era where riders took virtually any available motorcycle to race in the spirit of seeking adrenaline and comradery. Today the flat track Super Hooligan racing category is rapidly gaining popularity with riders of all ages and experience levels because it brings the fun back into a less structured environment where any rider can race virtually any motorcycle. Framers or custom race chassis machines are not allowed in the class; it’s designed to allow racers to lightly modify existing street bikes for racing.

Roland Sands on his "number 10" Scout Sixty Add All