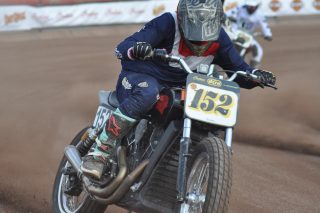 UNITED KINGDOM (21st August, 2018) – Indian Motorcycle were out for fun and mayhem at DirtQuakeVII, Arena Essex Raceway, Saturday 18th August. Thundering Chief tourers, Scout Hooligan racers and the World beating FTR750 combined to create a spectacular show like no other.

Kirkpatrick’s consistent pace meant that he headed up the Indian riders in the points standings; but he still faced stiff competition, with Tokelove hot on his heals and confident after her blistering performance at the Wheels and Waves festival. Falkman and Hatton also had their sights set on a good performance. Falkman always the showman in metal flake livery and a cape. Racing on Arena Essex’s tight short-track oval was fast and furious, hustling the road-based Scout Sixty, Kirkpatrick pushed hard to challenge the lighter Hooligan class machines, snapping at their heals to claim a solid P3 Podium closely followed by Tokelove in P4.

Not to be outdone by the Hooligans, DirtQuakeVII also saw Indian Touring bikes take to the dirt, with old masters Steve Parrish and Neil Hodgson sliding the range topping Roadmaster and Chieftain Limited around the oval to the delight of the crowd.

Indian Motorcycle added extra excitement to the weekend by unleashing the American Flat Track Indian FTR750 for a special Celebrity Hot Lap, DirtQuake Presenter Neil Hodgson, Flat Track Champion Alan Birtwistle and Jenny Tinmouth the fastest woman ever at the Isle of Man TT, all showed their skills on the dominant US American Flat Track championship machine, with podium finishes in every 2018 AFT round so far, the FTR750 recently secured a second consecutive manufacturer’s championship for Indian Motorcycle.

Watch and embed videos of the Indian Scout Hooligans in action:

DirtQuake VII is the inclusive festival of motorcycling that sees professional and amateur riders, plus celebrities from across the world of motorcycling, race flat track for the fun of it. With rare and unique bikes, family activities and star names, DirtQuake attracts a diverse crowd of motorcycle fans to enjoy a weekend centered on the racing which is the heart of the event. Such is the growing popularity of DirtQuake that, for the second year running, the event is being broadcast on a major UK television network. See all the action on Wednesday 29th August, 8pm, ITV4, it’s going to be a belter!