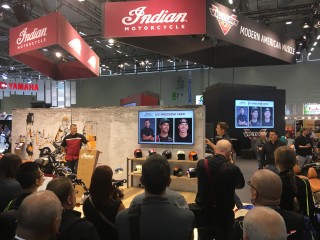 Indian Motorcycle is proud to show its 2017 line-up to a European audience at the INTERMOT show.

There are now nine models in the line-up, the newest being the Scout Sixty, which was announced in November 2015 at EICMA.

The headline addition for 2017 is the Ride Command touchscreen infotainment system that will come as standard on the Chieftain and the Roadmaster.

Scout Sixty
Scout Sixty can now be made A2 licence compliant after feedback from dealerships throughout Europe that demand from young riders for Scout Sixty was high. Dealers can now fit a restricting kit before delivery to the customer. Colours remain the same as last year.

Scout
Scout is available in seven colour schemes for 2017 and for the very first time is available in two-tones. One is Indian Motorcycle Red over Black and one is Brilliant Blue over Pearl White with Fireball Red Pinstripe (a nod to the colours of the United States flag). On the two-tone models, the Indian Scout logo on the fuel tank is replaced by an Indian headdress logo.

Chief Classic
The Chief Classic was only available in Pearl White last year, but it now comes in a new two-tone scheme – Burgundy Metallic over Thunder Black.

Remains the same as last year.

Chieftain
Chieftain comes in five colours this year – two of them new. It also has the new Ride Command touchscreen as standard.

Chieftain Dark Horse – remains the same as last year, but won’t come with Ride Command like other Chieftain models do.

There are five colours to choose from and it now comes with Ride Command as standard.

ABOUT INDIAN MOTORCYCLE
Indian Motorcycle, a wholly-owned subsidiary of Polaris Industries Inc. (NYSE: PII), is America’s first motorcycle company. Founded in 1901, Indian Motorcycle has won the hearts of motorcyclists around the world and earned distinction as one of America’s most legendary and iconic brands through unrivalled racing dominance, engineering prowess and countless innovations and industry firsts. Today that heritage and passion is reignited under new brand stewardship. To learn more, please visit www.indianmotorcycle.eu