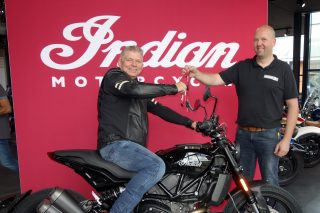 Indian Motorcycle awarded Martin de Vroege, a train operator from the Netherlands, with a brand new FTR 1200 as the lucky winner of the ‘Win An FTR 1200’ competition. Running from May until the end of July, all entrants needed to do was take a test ride on any FTR 1200 at their local participating dealer and enter their details at the dealership to be in with a chance of being randomly selected as the recipient of a brand new FTR 1200.

Martin first saw the FTR 1200 on social media, he fell in love with the FTR instantly. Even though he thinks of himself as a fan of Italian V-Twins, “I booked the test ride because I wanted to buy a new motorcycle and was curious about the riding characteristics of the FTR. The Win An FTR competition was the perfect time to try one. I obviously knew of Indian Motorcycle from ‘back in the days’, but I had never ridden one before,” he said. “The test ride really exceeded my expectations. The FTR has such an impressive engine, yet is very easy and comfortable to ride. You can almost steer it with one finger.”

Taking delivery of his brand new FTR at Motostore Barendrecht, a very happy Martin kept repeating that he couldn’t believe he had actually won a motorcycle. A petrol-head from the age of 16, riding off-road through the forests on mopeds and later on motorbikes, Martin got his motorcycle road license at the age of 27. His preference is for powerful sporty bikes, loving nothing more than a spirited ride whenever he can. Sometimes he rides with his friends but usually, he rides with his wife, who also has her own motorcycle, and they like to take nice tours with hotel sleepover.

Asked about the plans he had for making the FTR 1200 his own, Martin said: “the standard model is looking very good, so I might just keep the changes to the mirrors, turn lights and seat cover for now. But in the future, who knows?”

With the 2020 introductions of the FTR Rally and FTR Carbon, there is an FTR for everyone, even those with an A2 licence. To organise a test ride, find and contact your dealer now: www.indianmotorcycle.eu

Notes to Editors
The ‘Win An FTR 1200’ competition was only available in the following regions/countries:

ABOUT INDIAN MOTORCYCLE
Indian Motorcycle is America’s first motorcycle company. Founded in 1901, Indian Motorcycle has won the hearts of motorcyclists around the world and earned distinction as one of America’s most legendary and iconic brands through unrivalled racing dominance, engineering prowess and countless innovations and industry firsts. Today that heritage and passion are reignited under new brand stewardship. To learn more, please visit www.indianmotorcycle.eu.