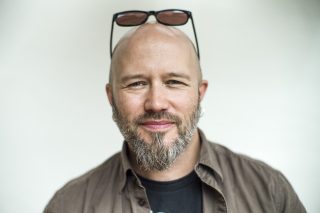 Stenegard brings Indian nearly two decades of product-design experience, a life-long passion for American V-twins and a proven record of success in designing motorcycles that resonate with a global audience.

“Ola has been incredibly successful in helping brands expand into new product categories and appeal to a wider variety of riders, which is exactly what Indian will be focused on in the coming years,” said Steve Menneto, President, Indian Motorcycle Company. “It’s rare to find a designer with Ola’s unique experience, and we are thrilled to have him on board at such an exciting and important time for our business.”

Stenegard previously led product design for BMW Motorrad. There he played a critical role in designing motorcycles, including most recently the BMW R-nineT. While his professional focus has largely resided in European motorcycles, Stenegard’s life-long personal passion has been the design and customization of American V-twins.

“I couldn’t be more excited to be joining Indian Motorcycle at a time when the brand has successfully returned itself to prominence and is powered by an increasing level of momentum,” said Stenegard. “There is no brand any more historic to American motorcycling than Indian, and I’m thrilled to build on the brand’s momentum going forward. I couldn’t ask for a better situation.”

As a young boy in Sweden, Stenegard was heavily influenced by an older brother who had a passion for choppers and hot rods. In the words of his brother, “If you want to be into bikes, there are only choppers,” and thus, a lifelong love for designing and customising American V-twins was born. By age seven, he had learned to weld and was chopping and customising anything he could get his hands on, from bicycles to mopeds.

At 15, Stenegard took first prize at his first motorcycle show in Stockholm with a moped he’d modified into an Arlen Ness-inspired chopper. The years forthcoming would see him customizing a countless array of bikes, including everything from café racers to dirt bikes, and most of all, a host of classic American V-twins.

Intent on making his passion his profession, Stenegard attended University College of Art, Craft & Design in Stockholm in 1994, where he spent three years before transferring to the prestigious Art Center College of Design in Pasadena, Calif. There he was immersed in the design of cars and motorcycles in Southern California, which he refers to as “the epicenter of the hot rod and custom motorcycle universe”. He later returned University College of Art, Craft & Design in Stockholm where he earned a Master’s degree in Applied Art (Industrial Design) in 1998.

In 2001, Stenegard returned to the United States to join Indian Motorcycle (under a previous ownership group) in Gilroy, Calif.

In 2003, he joined BMW Motorrad where he would become one of the brand’s most influential designers over the next 15 years, ascending to Head of Vehicle Design and working on virtually every significant new model program, ultimately helping the company successfully increase its relevance with a wider range of riders. Moreover, Stenegard’s influence wasn’t limited to product design. His passion for riding and his understanding of the marketplace allowed him to assume an influential role in the marketing of motorcycles. Stenegard’s creativity resulted in a number of BMW’s more-popular marketing platforms, including the “Soulfuel” campaign that supported the launch of R-nineT.

Aside from his professional efforts, Stenegard still immerses himself in the garage, working on choppers and other custom builds. Over the years, his custom builds have been featured in hundreds of magazines across the world and have earned numerous awards at some of the world’s most renowned motorcycle shows, including the AMD European Championship of Bike Building and Mooneyes, Yokohama. He also is distinguished as the youngest inductee in the Swedish Motorcycle Hall of Fame.

Stenegard and his wife Terese reside on a horse farm on the island of Gotland, with their three children, sons Isaac (18) and Grim (11), and daughter Saga (14).