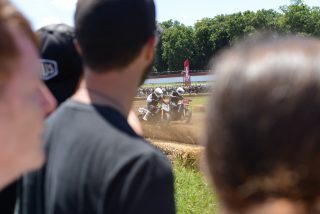 SWITZERLAND – Novelty in Switzerland as the first edition of the Steel Trophy takes place in Payerne, Switzerland, on August 10, 2019. Continuing the growth of Flat Track racing in Europe, the “Steel Trophy #1” brings the drift show to Swiss crowds with opponents racing around an unpaved oval track to win both a trophy and the honour.

Flat track racing, also known as dirt track motorcycle racing, originally popularised in the States in the 1960s and 1970s, is now gaining popularity in Europe. Along with the retro and vintage trend in production motorcycles, more and more Europeans are now competing on motorcycles that have been specially prepared for this sport.

Keep turning left
This extremely spectacular and popular sport, featuring various categories, takes place on unpaved, natural hard ground. Similar to speedway races, which are held on softer ground, bikers drift around the flat oval track to the left. While the special speedway motorcycles have no brakes, flat track bikes are modified production motorcycles that retain their rear brakes. Racers also wear a steel shoe on their left foot so that they can better control the drift of their motorcycles in the bends.

A show on and off the track
The Swiss Dirt Track Association (SDTA) wants to introduce the sport for the first time on August 10, 2019 in Payerne to a broad Swiss audience at the “Steel Trophy #1” because flat track is an explosive show – with its special retro and vintage flair – that takes place on and off the race track. The paddock is freely accessible, the riders, mechanics and other team members are traditionally friendly with each other and interested visitors can experience the personalities and technology up close.

The following bike categories will compete in the first international flat track race in Payerne:

A quality partner: the legendary American brand Indian Motorcycle
Alongside watch manufacturer Baume & Mercier, the organisers of the first big flat track event in Switzerland have also partnered with the importer of the legendary American brand Indian Motorcycle. The American manufacturer, which has in recent years conquered the Swiss market, has a rich and storied history in flat track racing and successfully came back to the sport in 2017, after 60 years of absence. US legend Jared Mees won the official US flat track championship with his “Indian Wrecking Crew” the same year that Indian came back to the race and achieved a second consecutive championship win in 2018.

Stefan Vogel, the managing director of Indian Motorcycle Switzerland, is very happy that the flat track sport has now arrived in Europe and Switzerland: “Flat track with its audience-oriented, cheerful and attractive vintage character, fits perfectly to the current zeitgeist. We are happy to be part of this new venture and we are convinced that this sport, with its very special atmosphere, will establish itself here with us.”

“Woodstock” just next door
The 1st International flat track race in Payerne has another official partner: the Newstock music festival that will also take place in Payerne on August 9, 10 and 11 at the “Manège des Aventuriers”. After the success of the first edition last year, bands such as “Coreleoni” (founded by the guitarist of the group Gotthard, Léo Leoni) and “Beau Lac de Bâle” will perform again. The entrance to this US Woodstock Style festival is free, exactly 50 years since Woodstock first went on stage in 1969.