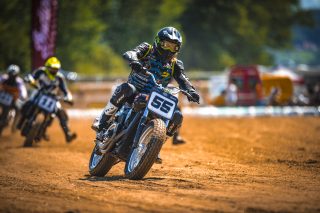 As Flat Track racing gains in popularity across Europe, Switzerland is the latest country to host an international round with the Newsstock Festival in Payerne the home for the very first event on August 10.

With an action packed schedule, Indian riders showed strong pace throughout, with four-time French champion, Wilfried Delestre, topping two of his three qualifying runs, before going on to win the final aboard the Krazy Horse prepared Scout Hooligan.

Local rider, Dominic Schnider, ranking third on the day, was enthusiastic about the very first Swiss Flat Track race, commenting: “The Indian immediately gave me a positive feeling. Duelling with Jérémy was lots of fun, in particular during the final. This has been a great event for Indian and the sport in Switzerland, a big well done to the Swiss Dirt Track Association.”

Flat Track enthusiasts were offered captivating and spectacular entertainment at the event, despite torrential rain on Friday flooding the venue and causing the event to be delayed by one whole day. Despite this, 7,000 spectators not only enjoyed the action in the in the Big Twins category, but also in the secondary classes: Vintage (1975 and older), Youngtimer (built between 1976 and 1995) and Modern (built in 1996 and later).