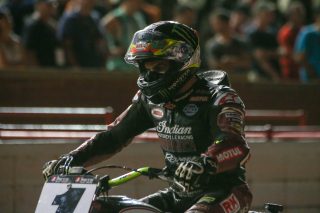 After winning each semi, Mees and Smith earned the top starting positions for the Main. Mees jumped out to an early lead and steadily increased his lead on Smith. Baker, who had a tough start from the third starting position, battled his way from the middle of the pack to the third-place position. After a red flag restart, Mees again stretched the gap between he and Smith, while Baker battled with Indian privateer Henry Wiles (Wilco Racing/Willy Built/Bandit Industries) and secured the final podium position by .008 seconds.

“The team was awesome tonight. It felt good to get another win and our first Wrecking Crew sweep of the season,” said Mees. “It was one of those nights where the Scout FTR750 was just incredible.”

“The track was fast with a challenging and narrow groove. But Mees came out dialled in and ran the line to near perfection,” said Gary Gray, Vice President – Racing, Technology & Service for Indian Motorcycle. “Our factory and privateers are consistently competing race-to-race, and we look forward to seeing what the OKC Mile brings us in two weeks.”

Through eight races, Mees holds a commanding lead with 170 points, while Wiles ranks second with 116 points. Baker’s third-place finish moves him up the leaderboard from sixth to third overall, with 101 total points. Carver and Coolbeth rank fourth and fifth with 99 points. Meanwhile, Smith is pushing his way up the leaderboard after suffering a broken left fibula and missing two races. Since returning three weeks ago, Smith has reached the podium twice and had a top-five finish. He currently ranks ninth with 73 total points.

The Indian Wrecking Crew and stable of privateers aboard the Scout FTR750 will continue its season on June 16 at the OKC Mile.