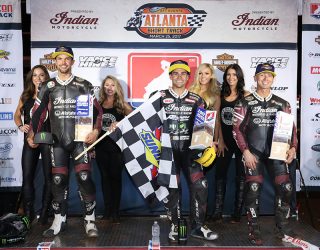 MINNEAPOLIS (August 21, 2017) – After more than 60 years away from professional flat track racing, Indian Motorcycle has won the 2017 American Flat Track Manufacturer’s Championship after a second-place finish at the Peoria TT.

“Securing the Manufacturer’s Championship after 14 races is an unbelievable accomplishment,” said Gary Gray, Vice President – Product for Indian Motorcycle. “To return to professional flat track racing after more than 60 years away from the sport and win the championship on a brand-new Scout FTR750 race bike is a testament to all the hard work from the entire Indian Motorcycle Racing team.”

With four races remaining, and Indian ahead of the next manufacturer by more than of 100 points, Indian Motorcycle has won the titles of Manufacturer Champion.

Aboard the Scout FTR750, the Indian Wrecking Crew have been on the podium 30 times out of the season’s 42 total podiums.

Jared Mees, the season’s point leader, holds a 41-point lead ahead of Bryan Smith, while Brad Baker rounds out the top three in the season’s standings. Jared Mees and Bryan Smith have tallied 11 first-place finishes, with seven going to Mees and four to Smith.

Indian Motorcycle Racing, backed by Allstate Insurance, has its sights set on an individual championship as American Flat Track returns to the Springfield Mile on September 3.