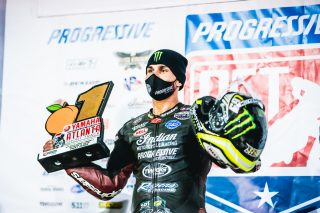 “It’s been incredible to see our team compete at a consistent level and again bring home the Manufacturer’s Championship for the fourth straight year,” said Gary Gray, Vice President – Racing, Technology and Service for Indian Motorcycle. “With four races remaining, we’re excited to see who can walk away with the No.1 plate. Briar’s been hot and Mees hates to lose, so we should be in a dramatic and entertaining finish to the season.”

Atlanta Short Track II continued the dramatic, bar-to-bar racing from the night before, as Indian Motorcycle Privateer Brandon Price held Mees off as long as he could, coming up just short as Mees made his pass with only a few laps remaining. Price’s second-place finished earned him his first podium of the season, while Briar rounded out the all-FTR750 podium with a third-place finish.

With 244 points, Mees is firmly in second and now just 12 points back from Briar, who has 256 points on the year. With a pair of fourth-place finishes in Atlanta, Indian Motorcycle Privateer Sammy Halbert remains in third with 193 points, while Bronson Bauman and Price are fourth and fifth with 153 and 148 points, respectively.

The 2020 American Flat Track season will continue on October 9-10 at The Dirt Track at Charlotte Motor Speedway for the Progressive Charlotte Half-Mile I & II.