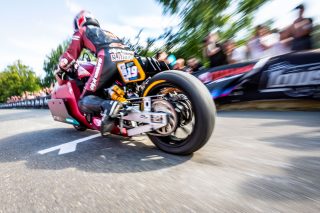 Host of production and special edition machines on display

Stuttgart, Germany (September 1, 2019) The 2019 edition of Glemseck 101 proved to be bigger and louder than ever, over the first weekend of September near Stuttgart, as Indian Motorcycle rocked the now internationally renowned event in front of a crowd of thousands.

With the American brand’s ‘big truck’ a fitting backdrop, Indian fans were treated to action on and off the track, as the Indian team brought along a host of production and special models for fans to feast on, including the iconic FTR 750 racer.

On the track, the team welcomed none other than 500GP legend Randy Mamola, making his German debut on Appaloosa, the Indian-Scout based racer, in the final Sultans of Sprint race event, while four editors from some of Germany’s most influential motorcycle titles battled it out on production FTR 1200s.

As the four editors battled it out on Saturday morning on the 1/8 mile drag strip, it would be Nico Röder from MO taking the overall win just ahead of Fabian Dresler from MOTORRAD, Thomas Kryschan from ROADSTER and Jan Zühlke from CRAFTRAD.

Saturday afternoon would see the coveted International Sprint Series race, with Mamola and Appaloosa taking to the track, giving the thousands of fans lining the track a real spectacle.

With more action on Sunday and the now traditional Indian Motorcycle party atmosphere, the 2019 edition of Glemseck 101 signed off in true style.

Check out the action and party with the images in the gallery.

Indian Motorcycle Company is America’s First Motorcycle Company®. Founded in 1901, Indian Motorcycle has won the hearts of motorcyclists around the world and earned distinction as one of America’s most legendary and iconic brands through unrivaled racing dominance, engineering prowess and countless innovations and industry firsts. Today that heritage and passion is reignited under new brand stewardship. To learn more, please visit www.indianmotorcycle.com.