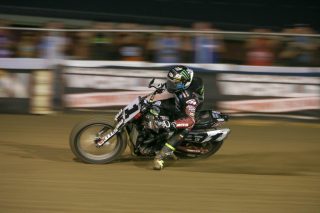 Mees was seeking redemption on Saturday night at the Lima Half-Mile as this was the only race he did not finish on the podium in the 2017 season. Determined, Mees edged out the competition early in the race and held the lead throughout the Main. Carver bolted to the second position and managed to close the gap between him and Mees in the second half of the race, but Mees was able to maintain his lead and further his lead in the 2018 points standings.

“I’ve had my sights on winning Lima ever since last year. This is a tough track and getting this win is especially meaningful for me,” said Mees. “I have to thank my team who does an incredible job at keeping my Indian Scout FTR750 in top form.”

“The Lima Half-Mile is one of the most challenging races of the year, and we’re thrilled to see another Scout FTR750 podium sweep,” said Gary Gray, Vice President – Racing, Technology & Service for Indian Motorcycle. “This was a momentous win for Mees in what has been an exceptional season for him and Indian Motorcycle Racing.”

The Indian Wrecking Crew and stable of privateers aboard the Scout FTR750 will continue its season on July 7th at the New York Short Track.

ABOUT INDIAN MOTORCYCLE
Indian Motorcycle is America’s First Motorcycle Company. Founded in 1901, Indian Motorcycle has won the hearts of motorcyclists around the world and earned distinction as one of America’s most legendary and iconic brands through unrivalled racing dominance, engineering prowess and countless innovations and industry firsts. Today that heritage and passion is reignited under new brand stewardship. To learn more, please visit www.indianmotorcycle.eu