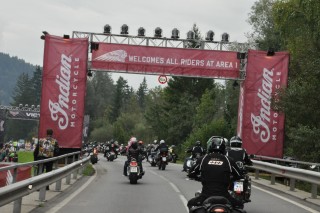 Austria’s Faak Am See becomes an annual biker’s mecca in the first week of September, for European Bike Week.

This year the hills were alive with the sound of Thunderstrokes when Indian Motorcycle came to town.

Indian Motorcycle dominated the Bikers Power Area 1, in the middle of three distinct ‘villages’ that turns Faak Am See into the centre of Europe biking culture for a week.

Indian Motorcycle previewed their new 2015 Roadmaster as well as the new range of finest quality apparel.

Resplendent in a rich 2-tone paint scheme, the Roadmaster will be officially launched in Europe at Intermot, in Cologne this October, but not before it wowed the crowds of Americana faithful at Faak; showing that Indian Motorcycle is back and has never looked stronger.

For potential owners keen to experience first-hand the legendary power characteristics of the Thunderstroke 111 engine, examples of all three current Chief models were available to ride – the 2014 Chief Classic, Chief Vintage and Chieftain – these no-obligation, escorted demo rides were selected to put the bikes through their paces, as well as placing the iconic style of the Indian Chief in the timeless natural beauty of the Corinthian Mountains, with roads that can’t fail to bring out the best in the high-torque motor.

The Area 1 Bikers Power Custom Show featured a heavily modified Indian Chieftain built by Patrick Meyer of PM American Cycles in Switzerland, demonstrating the custom potential within the model, in creating a world-class bagger – a popular style in Europe – which took first place in the Indian section of the Show.

Having blacked out the chromed finish of the engine, Patrick fitted a 21-inch Ness 10-gauge front wheel and 120/70 tyre beneath a minimal front fender. Patrick then restyled the bodywork with handmade panels – including stretching the panniers down over the Indian Stage 1 exhaust – finished with matte two-tone paint to make a bold statement motorcycle that is sure to inspire Indian Motorcycle fans.