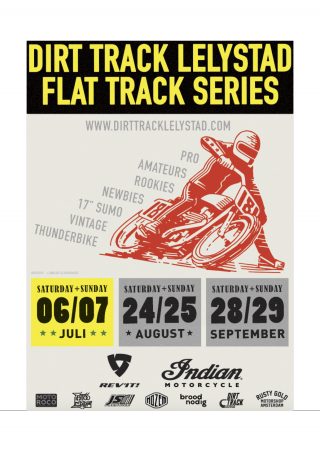 The Indian Motorcycle sponsorship of the new Flat Track Series comes off the back of the partnership with Dirt Track Lelystad, announced in October last year, and enhances their support of European flat track racing, complimenting the sponsorship of the Dirt Track Racing Association (DTRA) which held rounds of the DTRA Indian Motorcycle Hooligan and European Flat Track Championships at Dirt Track Lelystad at the beginning of May.

The Dirt Track Lelystad Flat Track Series features rounds over three weekends with training and practice on Saturday and racing on Sunday. Each weekend round will be action-packed with multiple classes from Newbie through to Pro and an open pit area allowing the crowd to meet the riders and admire the race machines.

For Round 1 race day on Sunday July 7, Indian Motorcycle will also be adding to the fun with their booth offering test rides of the latest models on the roads around Lelystad.