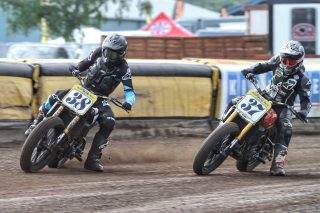 Round two of the Indian Motorcycles Flat Track Nationals 2022 Championship took place on the 14th and 15th of May at the Devitt MCN Festival of Motorcycling at East of England Showground with a program of excellent racing.

Racing was fast and furious in heat one and round two saw the Indian FTR and Indian Scout Hooligans taking to the track in their first race of the 2022 season. The MCN Festival of Motorcycling was the perfect place to welcome the Hooligans back to a packed grandstand.

Racing was fast and furious in heat one and the MCN Festival of Motorcycling was the perfect place to welcome the Hooligans back to a packed grandstand with the Indian FTR and Indian Scout Hooligans taking to the track in their first race of the 2022 season.

Round two of the Indian Motorcycle Flat Track Nationals welcomed several of European riders back to the UK. French rider #67 Dimitri Coste came third in the Vintage Four Stroke Class, and the guest rider from the Netherlands, #100 Menno Van Meer, rode brilliantly all weekend in the Pro Class. It was the second outing for our brand new Vintage Evo Class (1975-1985) so again the pits were stacked with some beautiful vintage bikes.

The Hooligan class did not disappoint with 2021 season regulars back for action and new faces in the mix for fast and spectacular racing. The fight for first and second place was a weekend-long battle between #93 Jack Bell and #38 George Pickering on the Indian FTR1200. In the end, Pickering put in a strong performance but had to settle for second place. The fight for the final spot on the podium was equally spectacular with #37 Leah Tokelove on the Indian FTR1200 securing third after battling hard with some very clever racing to hold off #786 Chris Northover on the Krazy Horse Indian Scout 1000.

In the Inters Class, flat track newcomer #199 Jake Edey, again dominated in the final for another win with #11x Charlie Kelly in a very close second. Kelly can’t be ruled out in this championship who, despite being a new rider to adult classes, is going from strength to strength. The third place on the podium was taken by #217 Steven Gurnhill.

The Rookie class was great to watch with lots of new riders competing for the podium spots. First place went to newcomer #86 Sam Shook, second place was taken by #911 Johnathan James and third place to #50 Colin McCabe.

The season continues with Round Three at Norfolk Area, Kings Lynn on 12th June.