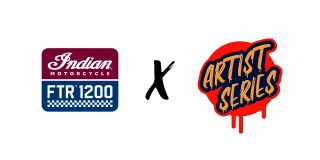 MINNEAPOLIS (May 30, 2019) – In a dynamic, creative display of artisanship, Indian Motorcycle, America’s first motorcycle company, today announced a collaboration with five renowned artists on a limited-edition line of tank covers for Indian’s all-new FTR 1200. Only 100 tank covers for each design will be produced, with the five unique designs to be unveiled on June 13 at Wheels & Waves in Biarritz, France.

Indian Motorcycle curated a lineup of artists with extremely distinct styles from street graffiti to modern abstract, in order to appeal to a wider range of consumer preferences. The artistic tank covers will allow FTR 1200 owners to instantly transform their bike into a piece of mobile fine art, while also increasing their personal connection to the FTR 1200.

The five artists include:

The FTR 1200 stands as Indian Motorcycle’s most-customisable platform to date, featuring four distinct accessory collections, designed to modify the bike’s overall look and feel based on the unique tastes and styles of different riders. With its fuel tank located beneath the seat, the FTR 1200 airbox sits directly over the motor where fuel tanks more commonly reside. This allows for tank covers that are easy to remove and interchange, making the process of customisation and personalisation even more efficient for riders.

“Art and motorcycles share a common thread of self-expression, and for motorcycles, customisation is where self-expression truly comes to life,” said Reid Wilson, Senior Director of Marketing and Product for Indian Motorcycles. “The FTR 1200 and its diverse accessory collections, were purposefully designed to enable a rider’s desire for self-expression, and the Artist Series serves that same purpose in a highly artistic fashion.”

An episodic content series, scheduled to debut shortly after Wheels & Waves, will showcase each of the five artists, their design process, and their unique airbox cover designs. Final designs and detailed product information will be available after the unveiling at Wheels & Waves on June 13.

For those buying a five-day ticket in advance, Indian Motorcycle will automatically enter them into a prize draw for a chance to win the all-new FTR 1200. The draw will take place on Saturday night at the main stage of the village. Advance tickets can now be bought online from: wheels-and-waves.com

ABOUT WHEELS & WAVES
Founded in 2008, Wheels and Waves is the successful realisation of the dream of a group of friends, the Southsiders, who are passionate about motorcycles. Lovers of the Basque Country, Southsiders have brought together hundreds of like-minded individuals who gather in the spirit of companionship. “Wheels and Waves is about eliminating social barriers and bringing different sets of people together without judgement. It’s about the joy of mixing together all kinds of communities, languages and cultures. It’s about living in the present without being nostalgic for the past, but not losing sight of the best moments of the past.” wheels-and-waves.com