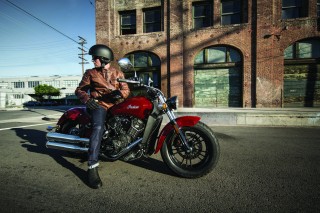 Newest addition to the line-up shares many of the elements of the award-winning Indian Scout, with a price point that brings legendary Indian Motorcycle craftsmanship and world-renowned Indian Scout performance within reach of every rider

Scout Sixty has a 60 cubic inch engine (999cc), hence the name of the bike, and promises to broadly appeal to all riders with a premium motorcycle at the lowest MSRP yet for the brand.

The new Indian Scout Sixty offers many of the same features and components of the award-winning Indian Scout, which was introduced in 2014 at the Black Hills Rally on the fabled “Wall of Death”.

True to the craftsmanship, reliability and legendary agility of the Scout, the new Scout Sixty shares the identical chassis, suspension and brakes — all mated to a new 60 cubic inch engine.

With a dry weight of 246kg and a potent 78hp and 89Nm of torque, the Scout Sixty is paired with a silky smooth, easy-to-shift 5-speed transmission and has a starting MSRP of €11,990 in Europe.

Offered in three classic Indian Motorcycle colours (red, white and black) the new model has a premium black seat, matching black frame and wheels and can be fitted with over 200 accessories already available for the Scout.

“The Indian Scout has been a stunningly successful introduction for us, with balance, performance and manoeuvrability that appeals to a broad swath of riders here in America and around the globe,” said Steve Menneto, President of Motorcycles for Polaris Industries. “The new Scout Sixty expands that reach even further to include newer riders and a younger demographic who long to experience the legendary quality and craftsmanship of an Indian motorcycle.”

A seat height of 25.3 inches (64.2cm) allows for sure-footed comfort at stops, and the low centre of gravity ensures agile cornering, precise balance and overall rider confidence and control.

A series of accessories including seats, handlebars and footpeg relocators allow the motorcycle to be tailored to fit each rider, while additional accessories such as saddlebags, wire wheels and quick-release windscreens give owners virtually unlimited freedom to customise their rides.

The new Scout Sixty is not shy on performance, with Roland Sands Designs getting the nod as the first to customise the new motorcycle. Sands has customised five new motorcycles to race prep them for battle in the street bike-based class for the “Super Hooligan” class at the Superprestigio of the Americas, due to take place on Saturday November 21 at the Orleans Arena in Las Vegas.

The new Scout Sixty is already en route to dealerships around the world and is sure to be a popular platform for customising and personalising over the winter period prior to the new riding season in 2016.

“The Indian Scout has quickly established itself as a stylish, head-turning urban cruiser that is easy to modify and make your own,” said Indian Motorcycle Marketing Director Scott Meek. “With a starting price of €11,990 and even broader appeal to a generation who take great pride in standing apart from the crowd, we expect the versatile new Scout Sixty to cement that reputation.”

For more information about the Scout Sixty and the Scout visit www.indianmotorcycle.com.

For information on the Super Hooligan race, visit www.superprestigio.com.

FRAME
The frame of the Scout Sixty was designed for style and exceptional performance. Its cast aluminium process allows for an integrated and compact design with exceptional strength and rigidity for class-leading handling.

SUSPENSION
Stout forks and shocks compliment the Scout Sixty’s chassis. Accessory shocks are available for those who want to push the bike harder.

STYLE
The lineage of the old Scout is clearly visible in the style of the bodywork. However the blend of modern and heritage has never found a more perfect balance than in the Scout and Scout Sixty.

ENGINE
The liquid-cooled four-valve engine grabs riders’ attention right out of the gate. Plenty of power complemented by a smooth power curve allows the heart of the Scout Sixty to both cruise and let rip.

ACCESSORIES
The Scout Sixty is ripe for customising, with many accessories available to create a unique look and fit. Stylish wire wheels and a floating solo saddle create a new silhouette and plenty of fit-kit accessories can tailor the controls to the rider.

ENGINEERING
The Scout platform is one of the most developed and tested in the industry. Designed with the most modern technology and manufacturing processes and backed by the rigorous testing regimen outlined by a very critical engineering team, the Scout Sixty continues the tradition of durability, power and reliability that elevated Indian Motorcycle to its legendary status.

NOTES TO EDITORS
The “modern” Scout era began at the Sturgis Rally in 2014 with a breath-taking debut of the new bike on the Wall of Death. The bike was a showstopper with consumers and press alike. The Scout became one of the fastest-selling models in Indian Motorcycle history, while being named Cruiser of the Year by various publications around the world. The custom community has also embraced the Scout platform with intense enthusiasm from dealers, pro builders and the aftermarket.