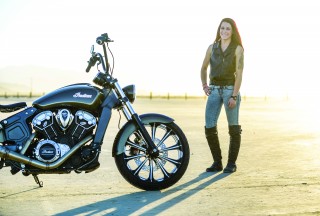 Indian Motorcycle left a brand new 2015 Indian Scout in the capable hands of Klock Werks Kustoms following the Sturgis reveal and the task of being the first person to ever customise the new model fell to Karlee Cobb.

“In 2008, at age 14, Karlee became the youngest person to set a land speed record at the legendary Bonneville Salt Flats, so it seemed only appropriate that she would design one of the first 2015 Indian Scouts”, says Klock Werks’ owner Brian Klock. “She had the biggest grin after test riding the new Scout – so giving Karlee the reins on this project seemed a natural fit.”

Changing the stance towards a bobber was the first task on Karlee’s list. She swapped from the stock 16” rims to an 18″ x 5.5″ rear and chose a 19″ x 3″ front; both in one-off contrast cut Reveal Wheels by Performance Machine. A 180 and 130mm set of Dunlop tires ensure that the bike has great traction and handling to match the new attitude.

The handlebars are custom-fabbed for the bike in black powdercoat with stealthy bar-end signals and tucked in rear signals from Motogadget. The front fender is a Klock Werks item custom trimmed to fit front and the rear is an upswept traditional bobber look featuring a “half-frenched” oval taillight that splits the fender surface. A low profile seat pan was fitted to give Karlee the feel of being “in” the bike.

PPG Paint was expertly laid on by Brad Smith at The Factory Match shop in Tea, SD is various panels of sage, gray, and earth tones to blend with the stock cast frame color and highlight the incredible engineering on the latest generation Scout.

“My goal was to build a bike that while is clearly customized, is one that a decent home mechanic could build,” says Cobb of her project she calls Outrider. “I was really blown away by the power and quality of the production Scout – and going a bit old-school yet maintaining the ride-ability of the bike was really important to me. Getting the first Scout to customize inspired the name. I’ve got a great team of friends and family in and around Klock Werks, and want to thank Indian Motorcycle for the chance to customize this bike.”

Karlee’s Outrider will be on display at the New York City International Motorcycle Show (www.motorcycleshows.com) and will be seen in the pages of custom bike magazines. For more information on Klock Werks Kustoms, log on to www.kustombaggers.com.

The 2015 Scout is the first truly new Indian Scout in over 70 years, yet its design pays homage to the legendary early Scouts that conquered the infamous “Wall of Death” and notched countless innovations, racing wins, world records and industry firsts along the way. A 1920 Indian Scout earned the title of the “World’s Fastest Indian” at the hands of Burt Munro in 1967. The new Scout is powered by an all-new, 1133cc, 100hp V-twin engine that combines the design, performance and reliability elements that made the original Scouts unstoppable and combines it with cutting edge technologies and industry-leading engineering for unparalleled durability and reliability.