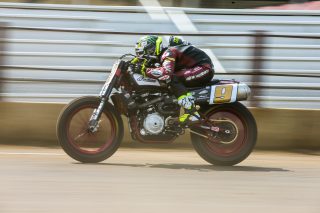 “It was so great to see Sammy come out to the legendary Springfield Mile and get his first win on the FTR750,” said Gary Gray, Vice President – Racing, Technology and Service for Indian Motorcycle. “He’s been a fierce competitor for several years, so to see him having success with Coolbeth and the FTR750 is truly special.”

The second round was nothing short of spectacular, as Mees, Carver Jr., Robinson, as well as reigning champion and Wrecking Crew Rider Briar Bauman all battled at the front of the pack. While Robinson ran in fourth for most of the race, he slowly gained ground on the group and made a strong push for the win. Mees held his position and was able to secure his third win of the season by a mere .043 seconds. Although Carver Jr. was running fast all day and was in position to make a push for the win, a mechanical malfunction caused him to dramatically fall to the back of the pack with only a few laps remaining. Bauman, the beneficiary, hung in there and made his way to his fifth podium of the season.

Through six races, Mees is again at the top of the leaderboard with 132 points. His perfect podium streak includes three wins, two second-place finishes and a third. After finishing seventh and third at the Springfield Mile doubleheader, Bauman falls back to second with 119 points. Halbert remains in third with 95 points, while Robinson is fourth with 88 and Wrecking Crew Rider Bronson Bauman completes the top five with 81 points.

The 2020 AFT season will continue on September 11 and 12 at the Williams Grove Half-Mile doubleheader.