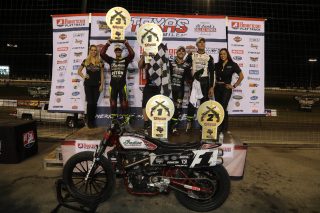 Mees and Cose each won their semi-final race and earned the top-two starting positions in the Main. After trailing initially, Mees was able to pass several riders and capture the lead. Cose ran the majority of the race from the third position and was able to hold off the fourth-place finisher, who was challenging for that final podium spot for the majority of the race.

“We’re entering an important stretch of the season right now, as Texas kicks off six straight weeks of racing,” said Mees. “To start this run off with a victory is huge. I want to thank Indian Motorcycle, my team and all the fans for their continued support. With Texas in the books, we’re on to Calistoga.”

“To see Chad reach the podium for the first time in his career was amazing,” said Gary Gray, Vice President – Racing, Technology & Service for Indian Motorcycle. “He’s feeling comfortable and riding well on the Scout FTR750, and we couldn’t be more excited to see him compete in these upcoming races.”

In a highly competitive night, a number of riders crashed and were unable to finish. Among those were Wrecking Crew Riders Brad Baker and Bryan Smith. Baker went down in his heat and suffered a mild concussion, while Smith was involved in a multi-rider crash in Semi 1. Both have reported to be okay, though, their status for the Calistoga Half-Mile on May 5 is currently unknown.

Through three races Mees leads the pack with 50 points. Wiles, who has finished fourth and fifth the last two races on his Scout FTR750 is currently second with 46 points. Despite missing the Main in Texas, Kenny Coolbeth Jr. sits in the fourth position with 36 points.

The Indian Wrecking Crew and stable of privateers aboard the Scout FTR750 will continue its season on May 5 at the Calistoga Half-Mile.