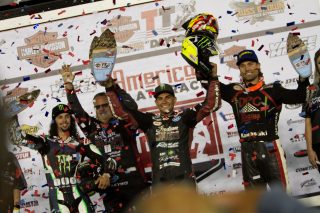 Along with Mees, a total of five Indian Scout FTR750 riders finished inside the top 10, including Brad Baker, Kenny Coolbeth Jr., Bryan Smith and Rob Pearson.

Winning both his heat race and semi-final event, Mees began the main event from the second starting position. He was one of several riders pushing at the front of the pack in the first few laps and made passes to get into second. In a move that reminded race fans of why he’s earned the nickname “Jammer,” Mees made a bold move at the jump, taking an aggressive inside line with his Scout FTR750, actually making contact with Baker to literally wrestle away the lead – a lead he would never relinquish.

“It’s awesome to come back here to Daytona and repeat. My team had the Indian Scout FTR750 dialed in,” said Mees. “It’s a long season, so to start out with a win and get an early lead is huge. With the number one plate this year, we know we have a target on our back. But we embrace the competition and can’t wait for Atlanta Short Track.” “It was incredible to return to Daytona after only one year and see so many Scout FTR750s on the track,” said Gary Gray, Vice President – Racing, Service & Technology for Indian Motorcycle. “The entire night was filled with great racing, as we even had some tight battles in the semi-finals where a few Indian privateers just missed the main. In the end, though, just as we saw many times last year, Jared hit a rhythm and took over. Congrats to Jared and his team on the repeat.”

The Indian Wrecking Crew and stable of privateers aboard the championship-winning Scout FTR750 will continue its season on April 7 at the Atlanta Short Track. In 2017, the Wrecking Crew swept the podium in Atlanta, as Mees, Baker and Smith finished 1-2-3, respectively.