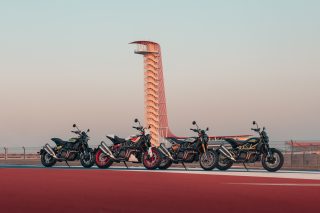 Indian Motorcycle is delighted to be back at Motorcycle Live once again this year, presenting models from its 2023 line-up at the UK’s biggest motorcycle show, running from this Saturday (19th November) until Sunday 27 November.

The legendary American brand’s presence at the NEC in Birmingham is boosted with the debut of its 2023 models, announced just over a week ago at the EICMA show in Milan. Joining the established line-up will be the new and updated FTR range, giving UK fans their first chance to see the revised naked sports bike line-up, including the new FTR Sport and FTR Rally.

Indian Motorcycle’s Claire D’auria commented, “We’re thrilled to be able to bring key 2023 models to Motorcycle Live so quickly after their announcement at EICMA. The new FTR range has been updated for next year, with a new FTR Sport model slotting into the line-up, flanked by some dramatic colour way updates to the FTR base model, the FTR Rally and the range topping FTR R Carbon. On top of this, we’re pleased to bring the rest of our line-up, along with some special builds to whet the appetite of those with a flair for customisation and the original FTR 750 flat track racer too.”

Joining the new FTR models will be the new Chief model range that first debuted at Motorcycle Live just one year ago, while the new Scout Rogue gives fans of the brand’s popular middleweight a new sporty alternative.

And for fans attending on the first Saturday, the Indian Motorcycle UK crew will be joined by legendary motorcycle racer and King of the Baggers protagonist, Jeremy McWilliams, who will be on hand to meet fans and chat about his, and the team’s legendary season state-side on the championship winning Indian Challenger.

Indian Motorcycle can be found at: Hall 3A, Stand 3D30

The Indian Motorcycle crew will be delighted to talk with press and discuss the updates, as well as press test demonstrator requests for 2023.