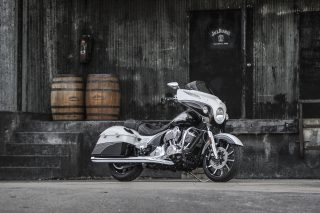 Indian Motorcycle is proud to announce the availability of 100 Limited Edition Jack Daniel’s Chieftain bikes with 10 of these going on sale in the EMEA region at 6pm CET on Tuesday 14th March.

In the same spirit this year, 100 Limited Edition Chieftain’s will be available globally with 10 of these allocated to select countries in Europe, the Middle East and Africa (see below).

Each motorcycle comes with a commemorative American flag handcrafted out of Jack Daniel’s barrel wood that includes the owner’s name, motorcycle number and VIN.

The individually numbered bikes come with a two-year unlimited mileage factory warranty and free membership in the Indian Motorcycle Riders Group (IMRG) for one year. The Limited Edition Chieftain had design input from Klock Werks Kustom Cycles of Mitchell, South Dakota who came up with a wide array of custom details such as:

– A number of Jack Daniel’s “Old No. 7” logos and custom badging is interspersed over the bike, including logoed billet driver and passenger floorboards, leather tank pouch, aluminium tank console with motorcycle number and unique cam, primary and air intake covers.

– The crowning detail is a handmade, pure silver Jack Daniel’s horn cover badge, hand-crafted by the team at Montana Silversmith, exclusively developed and produced only for this motorcycle.

Steve Menneto, President of Motorcycles for Polaris Industries says: “Once again, Brian Klock and his team at Klock Werks Kustoms exceeded our expectations with a totally unique Indian Chieftain that combines a sense of exclusivity with a tough, aggressive edge. We couldn’t be happier with it.” Dave Stang, Director of Events and Sponsorships for Jack Daniel’s says: “The response to last year’s collaboration was nothing short of spectacular and we’re extremely proud to carry this partnership forward in 2017 to further reinforce our ‘Bottles and Throttles Don’t Mix’ campaign.”

“Both Jack Daniel’s and Indian Motorcycle were born from a singular vision, powered by a relentless sense of ambition to bring a dream to life and that’s ultimately what this Limited Edition Jack Daniel’s Indian Chieftain represents.”

To order one of these highly sought after limited edition motorcycles please visit or call your local Indian Motorcycle dealership at 6pm CET on Tuesday 14th March.

Delivery is expected to be August 2017.

Pricing varies between these countries, but is expected to be around the €38,500 mark.

Confirmed prices so far are:

Note this motorcycle will not be on sale in France due to alcohol partnership laws.