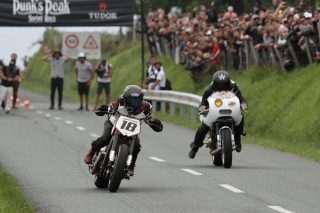 HONDARRIBIA, SPAIN – The Young Guns Scout AKA Miracle Mike continues to prove itself as a formidable sprint racer after winning the Superbike category at Punks Peak today.

Ridden by the former 250cc GP rider Katja Poensgen, the Indian Scout blasted easily through its three sprint races to go up against the powerful BMW built by the Workhouse Speed Shop and ridden by Sebastien Lorentz in the final.

Katja came to Punks Peak (the GI-3440 mountain road across the top of Mount Jaizbikel near San Sebastian) buoyed by her win last weekend in the Essenza sprint race and was confident going in to the race.

“The Scout is running so, so well,” she said. “I know that the Young Guns dialled up the power for the race and I could certainly feel that on the sprints today.”

In her third sprint Katja sent sparks flying from underneath Miracle Mike as she leant him over through the small bend halfway in the course giving the Young Guns a job to replace a section of exhaust that she scraped away.

The Young Guns, Fabian Witzig and Nik Heer, celebrated in the pits with Katja and were absolutely thrilled with the win. For Fabian, the technical mastermind behind much of the engine work on the Scout, it was a relief that Katja had returned safely, but also that his creation thrashed a field made up of Ducati, BMW, Yamaha, Buell, Harley-Davidson machines and even an electric bike from Essence Motorcycle.

Fabian said: “It feels amazing. You just have to look in the pits now to see how the standard of bikes is increasing. The best thing for me was to see Katja today take that corner at full throttle, it really was an amazing sight.”

In a field of over 100 machines and five different classes, Miracle Mike topped the most prestigious class. This stripped down sprinter – with a nitrous oxide system mated to the Scout’s already powerful 1133cc V-twin engine – is gaining a large fan following of people who love both the headless chicken story behind it and the craftsmanship by the Young Guns.

Grant Bester, VP/GM for Indian Motorcycle in Europe said: “This project was all about bringing the right cool people together to see what Indian could do. We wanted to try and bring back the essence of the Indian Motorcycle Company in building, competing and having fun. Seeing Katja ride Miracle Mike today was a thrill and I’m delighted that Indian came out on top.”

There’s some downtime for the Young Guns and Miracle Mike now as the second and final Essenza sprint race is a few months away in September at Glemseck, Germany.

Indian would like to thank Öhlins Racing, Akrapovič and Brembo for their support and partnership in this build.

The other entries in the Superbike category were:

Please credit these to Voyopix
1234
Add All