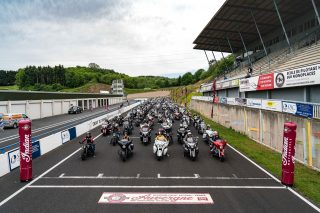 FRANCE (JUNE 8-9, 2019) – Indian Motorcycle created a spectacle in Auvergne region over the weekend with the launch of its first event specifically dedicated to members of the Indian Motorcycle Riders Group (IMRG). Just six years since relaunching the brand, more than 300 machines and no less than 500 people travelled from all over France and Europe to share their passion for America’s first motorcycle company at the IMRG village at the Indian Saloon in Riom.

The program of events included: a visit to the Baster museum, riding the fabulous roads of Puy de Dôme, and a parade on the mythical Circuit de Charade.

“Mission accomplished! We are very proud to have successfully launched this event alongside Thierry Foucher. Up to now, the IMRG meetings have been integrated into existing events; in the past we have collaborated with the Dax Motor’s & Blues festival and Punta Bagna de Valloire, which allowed us to grow the gathering to give it more resonance and impact each year. This year, we had to step up and create an annual and unmissable event dedicated solely to our clients and IMRG members, it’s always an important moment of sharing and communication. We had a very enjoyable ride and discussion with them about the common passion that drives us around Indian Motorcycle every day. It helps us better understand their expectations. It’s a first, and I think it has made an impact that will set an obvious sequence. Thank you sincerely to Thierry Foucher and his team for their involvement and their professionalism, as well as the Indian Saloon, the Baster Museum and the Circuit de Charade. The appointment is set for 2020!”

Friday was dedicated to welcoming participants with an opening night. This inaugural cocktail invited the 500 participants to the Indian Saloon, famous for its decor dedicated to custom culture, and particularly Indian Motorcycle, and included a performance by American singer, Gilda Solve.

On Saturday, participants took the road on their Chiefs, Scouts, Roadmasters and other Indian Motorcycle models to trace the tourist routes from the Puy de Dôme and the Puy de Sancy massif before gathering at an award ceremony for the regional Club with the most representation over the weekend.

The Baster museum opened its doors for the occasion with bikes from Indian Motorcycle dating back to 1930 and worth over 300,000 euros.For Sunday morning, the event moved on to the mythical Circuit de Charade in the Auvergne Volcanoes park. This sinuous route, with very pronounced elevation changes, had its heyday in the 70s with F1 and Motorcycle Grand Prix and, for the inaugural IMRG celebration, hosted more than 300 bikes from Indian Motorcycle for the giant parade.

The goal was to break the world record for the number of Indian Motorcycle models in a parade. The United States previously held this record with 274 motorcycles. After a grid formation of all participants, 323 motorcycles were counted. World record beaten!

Following this record count, the motorcycles set of on the parade for two laps of the 4.2km circuit lead by the official America Indian Motorcycle Truck.