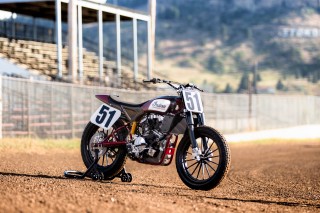 Indian Motorcycle started its official return to professional flat track racing with the public debut of the Indian Scout FTR750 on August 7 at the legendary Buffalo Chip venue during the Sturgis Rally.

On-hand for the public unveil were Bobby Hill and Bill Tuman, two surviving members of the legendary Indian Wrecking Crew, both AMA Hall of Famers, along with hundreds of motorcycle industry dignitaries and members of the press.

The debut of the Indian Scout FTR750 featured the #51 as a nod to Bill Tuman being the last factory racer to win a National on an Indian Motorcycle.

Much like the design philosophy behind Indian Motorcycle’s family of production bikes, the design and engineering teams built the FTR750 to artfully combine state-of-the-art technologies with design elements from legendary Indian racing models from history.