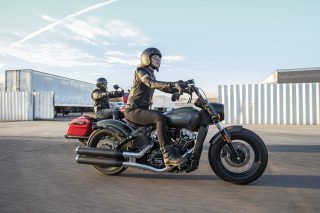 Indian Motorcycle 2020 Scout lineup pays homage to the 100-year legacy of the iconic Indian Scout with the Scout Bobber Twenty and the limited edition Scout 100th Anniversary. Also for 2020, Indian Motorcycle is introducing a selection of new Scout touring accessories, including a colour-matched Quick Release Fairing with a two-inch Windshield and weather-resistant Semi-Rigid Quick Release Saddlebags.

“The Indian Scout has stood the test of time as one of the most influential, iconic and recognisable motorcycles in the world,” said Reid Wilson, Vice President for Indian Motorcycle. “100 years is an incredibly special milestone, and it made perfect sense to honour Scout’s history and legacy with these two heritage-inspired 2020 models.”

For riders looking to tour on their Scout, Indian Motorcycle is introducing a handful of new accessories that will help the trip last longer. A brand new, colour-matched Quick Release Fairing with a two-inch Windshield is available for all model years of Scout and Scout Sixty and comes with the option to change to either a five-inch or seven-inch Windshield. To complete the touring package, riders can add the Solo Luggage Rack (available in chrome and now in gloss black) and a Solo Rack Bag. In winter 2019, riders can add the brand new Semi-Rigid Quick Release Saddlebags. With additional Indian Motorcycle accessories, a rider can customise their Scout Bobber with a Rider Comfort Seat, or add some more aggressive style to Scout and Scout Sixty with Bar End Mirrors, Smoked turn signal Lenses, Tinted Windshields, and varying handlebars and foot controls to achieve the perfect fit for the rider and passenger.