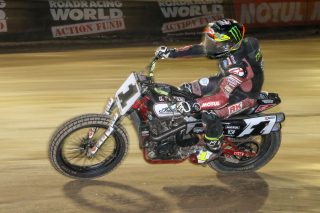 Through 11 races, Indian Motorcycle Wrecking Crew riders and privateers have combined for a total of eight all-Scout FTR750 podiums.

The New York Short Track Main started with Baker in the number one spot. Mees battled Baker through the first 10 laps, ultimately making the pass and stretching his lead through the remainder of the Main. Coolbeth continued his fight, passing riders to reach third. Coolbeth didn’t let up, though, as he made a pass on Baker in the final lap to secure second and his fifth top-five finish of the season. The third-place finish was Baker’s eighth top-five finish and third podium of the season.

“It’s incredible to have this race complete the grand slam this season. It’s a prime example of the support I have with my crew,” said Mees. “We worked through a lot, and when it mattered most they had my Scout FTR750 fully dialed for the Main Event.”

“It’s awesome to see Mees get his second career in-season grand slam,” said Gary Gray, Vice President – Racing, Technology & Service for Indian Motorcycle. “He’s earned himself a healthy lead in the points standings, but there’s still some big-time tracks coming up on the schedule, so it’ll be exciting to see how he and the other riders perform.”

Smith, who did not attempt to start Semi 1, will go in for surgery on Wednesday, July 11, to repair screws that came loose in the leg he broke earlier this season at the Texas Half-Mile. Smith is targeting a return for the next American Flat Track race, The Buffalo Chip TT on August 5.

Next up, Mees, Baker and Cose will join four other American Flat Track riders and travel overseas to the Goodwood Festival of Speed in England from July 12-15.

The four-day celebration of motorsports history, design and technical achievement will further introduce the Indian Motorcycle riders and the Scout FTR750 to a global fan base.

Following the Goodwood Festival of Speed, select Indian Motorcycle riders will stop in Minneapolis for X-Games on Sunday, July 22.

The American Flat Track season will continue its season on August 5 at The Buffalo Chip TT in Sturgis, South Dakota, followed by a quick turnaround with the Black Hills Half-Mile in Rapid City on August 7.