Login to Download
Первый этап King of the Baggers 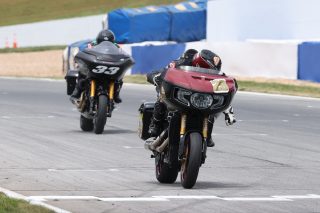 Indian Challenger racer Tyler O’Hara, reigning MotoAmerica King of the Baggers champion, started the season with a win aboard the Mission Foods S&S Cycle, Inc. Indian Challenger at the Michelin Raceway Road Atlanta. In a repeat of last year at Laguna Seca, Frankie Garcia and the Roland Sands Design Indian Challenger team secured a third-place finish, putting the only two Indian Motorcycle teams on the podium.

Defending his title, O’Hara put in a strong performance in qualifying to start from pole position with Garcia starting from the second row in fourth. After a difficult start, O’Hara initially dropped to third behind Garcia but quickly regained composure to move up to second and chase down the leader.

After several laps bridging the gap O’Hara was able to shadow the leading rider while looking for opportunities to pass. O’Hara sealed the victory with 3 laps to go in a hard braking move up the inside of turn 10a that ended an intense back-and-forth battle for first. Garcia continued his solid ride to defend and maintain third position throughout the race.

As the only two Indian Motorcycles in the field, the Indian Challenger again sets itself out as the Bagger to beat with both finishing on the podium and O’Hara taking pole, setting the fastest lap and taking the win.

The series continues with round two of three from Road America, June 11-13.

To learn more about each race team, visit SSCycle.com, RolandSands.com