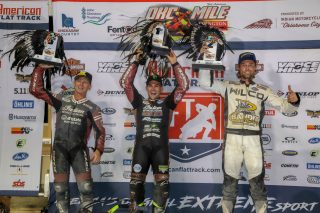 Mees got away clean at the start of the Main and continued to lengthen his lead and ultimately won by 12.839 seconds ahead of Wiles. With the win, Mees ties Kenny Coolbeth Jr. (Nila Racing/Columbia Avionics) for 37 career wins and now ranks fifth all time and is the winningest active rider in American Flat Track, along with Coolbeth.

“I really enjoy racing in OKC. The track is top-notch and I’ve had success here the last few years,” said Mees. “That said, nothing is ever easy in flat track. I have to credit my team for all their hard work in keeping my Indian Scout FTR750 dialed in.”

Not to go unnoticed, Wiles raced to an impressive second-place finish. Traditionally known as a “TT master,” Wiles has seen success when on the Scout FTR750, which he’s raced in eight consecutive events starting in Atlanta on April 7. Since then, he’s earned six top-five finishes, including two podiums on mile-long tracks.

“There’s no doubt Mees is having a career year, but there are many of other riders reaching new levels for the first time in their careers as well,” said Gary Gray, Vice President – Racing, Technology & Service for Indian Motorcycle. “Halfway through the season, we’re not only excited to see Mees continue this incredible run, but also see who will emerge and compete for top positions.”

Through nine races, Mees leads with 195 points, while Wiles is second overall with 136. Baker’s fourth-place finish advances him up the season standings to third place with 116 points. Coolbeth and Carver rank fourth and fifth with 105 and 100 points, respectively. Smith’s third-place finish propels him from ninth to sixth with 90 total points.

ABOUT INDIAN MOTORCYCLE
Indian Motorcycle is America’s First Motorcycle Company®. Founded in 1901, Indian Motorcycle has won the hearts of motorcyclists around the world and earned distinction as one of America’s most legendary and iconic brands through unrivaled racing dominance, engineering prowess and countless innovations and industry firsts. Today that heritage and passion is reignited under new brand stewardship. To learn more, please visit www.indianmotorcycle.eu