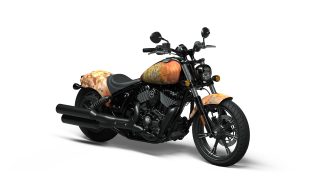 Highly respected modern-traditional tattoo artist Shige transforms all-new Indian Chief with a design dedicated to the Japanese Oni Demon with a storm of falling cherry blossoms.
The second of three headline artists work to be revealed in CGI
as part of the ‘Indian Motorcycle X No Regrets’ tattoo art collaboration.

Indian Motorcycle unveil the second of three unique tattoo inspired designs, created by three iconic featured tattoo artists – Mayonaize, Shige and Carlos Torres – whose Indian Motorcycle Chief based works of art will each be revealed in high-resolution computer-generated imagery over the next three months.

Hailing from Yokohama, Japan, Shige practices the art of tattooing from his private studio ‘Yellow Blaze’ where he has refined his style over the past 24 years, interpreting traditional Japanese themed body art with his own unique twist.

Shige perfected his highly technical artistic skills in the mid-nineties while working as a motorcycle mechanic by day and tattooing at night, that passion for American motorcycles translated into his choice of design for the Indian Motorcycle Chief.

Talking with Indian Motorcycle’s Ola Stenegärd, Shige explained his design:
Ola Stenegärd – “I first came in contact with Japanese custom bike culture back in the 90’s, the more I learned about Japanese culture, I started seeing parallels in the culture of craftsmanship. Everything from custom bikes to the Japanese art of tattooing. What is the story of the design?”

Shige – “I picked the ‘Oni demon with storm of falling cherry blossoms’ design. My understanding of tattooing is different from what the majority thinks – who understand it mainly as decoration. The reason for the placement of an Oni-demon tattooed on the belly means you have Oni-demon in the center of the body and heart, this translates to the motorcycle fuel tank. The Oni-demon stands for strong will and protection; Oni is a demon, but its meaning is not evil. It wards off bad luck and protects you from evil. Having Oni-demon tattooed on the belly shows one’s determination to live in this harsh world with a strong heart. The Japanese language is full of mystery, and it is believed that the stomach contains the entire human heart”

“A tattoo has to be beautiful as the body moves. The cherry blossoms have to be perfectly composed as they are there to balance the Oni-demon, together with the deep meaning of the flower. Cherry Blossoms means ‘the pathos of things’. This image of ‘a sensitivity to ephemera’ can also be related to the motorbike – or even one’s life. That’s the reason why I chose this image. Showing the Indian Motorcycle Chief and the dramatic depth of life itself. It is not just about looks. I desire to put emotional drama into the design of this motorbike. And the Oni-demon does create this drama”

Shige’s design will be applied to a real Indian Motorcycle Chief later this year and revealed in the metal at a VIP event in London in Spring 2022, alongside designs from artists Mayonaize and Carlos Torres. Forty more of the world’s leading tattoo artists will all compete to have their Indian Motorcycle Chief designs made a reality in steel and paint later this Autumn by public vote.

Alongside the three ‘Art-Bikes’ designed by the three featured artists, Indian Motorcycle and No Regrets are offering the chance for riders to win a dream tattoo.

By registering for a test ride online riders could win a tattoo of their choice, in a two-day studio session compliments of No Regrets & Indian Motorcycle, valued at €6000.

ABOUT NO REGRETS
No Regrets is a global leader in the tattoo industry having established a group of luxury studios based in the UK. Since opening their first Cheltenham studio in 2008, owner Ben Lakin has launched multiple successful studios in London, Bristol and Exeter. Over the last decade, No Regrets has carved out a reputation for pushing boundaries and challenging stereotypes within the industry. Their studio spaces are brimming with thought-provoking artwork and high-end décor. As well as attracting guest artists from around the world, No Regrets is home to award-winning resident artists who are constantly expanding their styles and expanding a network of clients who covet their work.