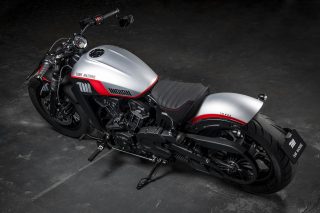 When commissioned by Indian Étoile, Molina proposed an innovative approach that would take the base bikes from their stealthy matte black to striking, bright colour schemes taking inspiration from racing, particularly the American Nascar series.

“I really wanted to imagine some intense colour and work on a new line that would redraw the Indian Scout’s tank. It is a bold choice because I decided to integrate Fluro colours to achieve this. I did not want this series to just be another build among others, the intention really was to start a new trend,” said Molina.

“While selecting the colour mixes to present to Indian Étoile, I immediately hooked on three schemes but found it impossible to make a choice of just one. I am incredibly lucky to have a partner who trusts me completely on these innovative projects. So, Sebastien from Indian Étoile agreed to create all three bikes. The name of the series seemed so obvious, the motorcycles are so luminous in these Fluro colours, that we decided to baptise them NEON.”

Attention to detail is a key trait of Tank Machine’s creations, one that makes them so refined and popular. This attention to detail extends to the choice of accessories and is especially important for the coherence of their projects, and the NEON Series is no different.

“We chose the Scout Bobber Sixty in order to have a purified base for the modifications we were going to make, and once the colour schemes were set, we set about choosing and developing a range of accessories to really pull the project together. This includes a Dirt Track style for the light nacelle, street handlebars with accoutrements plus a Supertrapp exhaust.”

After many hours refining the three builds, teasing everyone on social media during the process, Tank Machine and Indian Étoile have put the final touches to the NEON project and present the series to the world.

With a choice of three spectacular colour schemes, all sporting the Tank Machine logo, anyone lucky enough to own one of the NEON series will certainly stand out wherever they ride, while those taking a closer look will appreciate the amount of effort that has gone into making these specials so coherent.