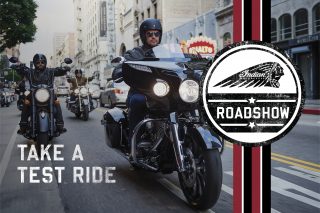 Indian Motorcycle – along with its expanding dealer network – will have an even bigger number of opportunities to test ride an Indian this coming season.

Most countries are running a ‘Roadshow’ where the entire Indian range tours between venues from one weekend to another, letting you try not just one bike, but any you fancy. There’s no obligation to buy too, just to come and experience an Indian.

Grant Bester, General Manager and VP of Indian in the EMEA region said: “Our dealer network has expanded rapidly and if you’re seen Indian and wondered what our bikes are like to ride, then you have the chance to come and join us on one of our many Roadshow events this year to discover for yourself.”

Here’s a breakdown of the dates and venues in each country.

France, Germany and Scandinavia all have an Indian-branded truck that will drive between venues.

All of the UK dealerships will be holding regular demo events throughout the year so please see @indianmotorcycleuk on facebook for updates.

Dealers are open every week, just book a test ride online
Open house for all dealers, 24th and 25th March
Mega Motortreffen, 20th and 21st May

Book a test ride any day at an Indian dealership.