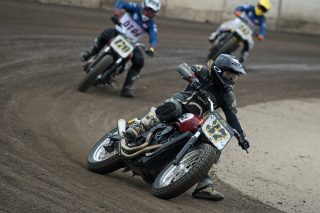 Twenty-year-old Business Management Masters student Leah Tokelove (#37) joined the 2018 Indian Hooligan team as a supported DTRA scholarship rider, following her rise to the DTRA’s Pro class in 2017, where she rides a 450.

The Indian Motorcycle Hooligan Class represented an all new challenge for her as “Street Bike Racing” racing rules allow only lightly modified 750cc twins and above, all road based machines, to battle it out on the shale ovals.

From heat one at Kings Lynn Leah looked comfortable on the bike, laying down faster and faster laps to qualify for the final; where she picked off her opponents while calmly building pace to claim the fastest lap of 18.013, giving her a half a second advantage on her closest rival. Moving to P2 on the final lap, Leah secured a solid podium on her first outing, clearly showing her intent for the forthcoming Hooligan season.

Speaking after the final, Leah said: “It’s been an amazing day, I can’t thank Indian and Krazy Horse enough, the bike performed faultlessly all evening and I’m stoked to be able to put the Indian on the podium. It’s a massive difference to riding my pro-bike and there is some tough competition; with a bit more bike time I hope to really get up there – I’m buzzing to be honest – we’ve a lot to look forward too!”

The next Hooligan round takes place at ‘Hells Race’ at the Lelystad Speedway in the Netherlands on May 6th with a practice day on May 5th. Make a weekend of it and enjoy the atmosphere!

In the image galleries, Leah Tokelove has the number 37 race plate.

Embed a video of Round 1 from here.

Find out more about all the race classes and dates at www.dirttrackriders.co.uk

Photos by Ian Osbourne
12
Add All