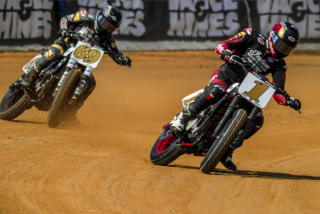 Bauman’s win on Friday night not only marked his first of the 2020 season, but also marked his first career Mile win – earning him a career grand slam. The win was also historic for Indian Motorcycle Racing, as the FTR750 race bike reached its 50th win since entering AFT in 2017.

“We’re extremely proud to see the FTR750 reach 50 wins in such a short period,” said Gary Gray, Vice President – Racing, Technology and Service for Indian Motorcycle.  “It’s not only a testament to our engineering team who developed such an incredible race bike, but also to the riders and race teams who have each contributed to this historic milestone.”

Saturday night saw yet another evening of exciting racing with the Indy Mile II. Though Mees ran up front for most of the race, many riders exchanged passes behind him. Bauman stayed in contention, remained patient, and made his move with only a few laps remaining. Bauman held on to complete the doubleheader sweep and take a three-point lead over Mees on the season.

Through four races, Bauman has two wins and two second-place finishes and is the current points leader with 90 points. Mees, in second with 87 points, has two wins, a second- and a third-place finish. Indian Motorcycle Privateer Sammy Halbert, is currently in third with 66 points, while Wrecking Crew rider Bronson Bauman is in fourth with 55 points.

The 2020 AFT season will continue on September 5 and 6 at the Springfield Mile doubleheader.