Login to Download
Indian Motorcycle Racing - 2022 King of the Baggers

Login to Download
Indian Motorcycle Racing - 2022 King of the Baggers 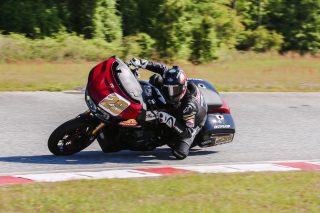 “The inaugural King of the Baggers race in 2020 truly disrupted the motorsports world, and the three-race season in 2021 expanded on that and left fans hungry for more. Now with seven races in 2022, King of the Baggers season is primed to take bagger racing to an entirely new level,” said Gary Gray, Vice President – Racing, Technology and Service for Indian Motorcycle. “These races are dynamic platforms to showcase the performance capabilities of our baggers, and we are proud to expand our efforts with an official factory team and growing roster of talented privateers.”

“We are excited to continue our partnership with Indian Motorcycle Racing,” said Juan Gonzalez, Mission Foods Chief Executive Officer. “They are supporting an amazing group of riders that will provide lots of racing excitement for all King of the Baggers race fans.”

S&S® Cycle: Tyler O’Hara & Jeremy McWilliams
Tyler O’Hara enters his third year piloting the Mission® Foods S&S® Indian Challenger, considered by most as the most formidable challenger to recapture the King of the Baggers title in 2022. After winning the inaugural King of the Baggers title in 2020, O’Hara fell just short in 2021, finishing the points race second overall.

Hailing from Ireland, and making his bagger racing debut, is seasoned road racer Jeremy McWilliams. Piloting the second S&S Indian Challenger factory ride, McWilliams brings a wealth of experience and valuable technical knowledge to the team in the ongoing effort to refine and optimize Indian Challenger setups for each race. A four-times Irish Champion, McWilliams began his professional racing career in 1993 and has competed in a variety of road races, series, and classes – including nine years in MotoGP.

“Jeremy is the ideal addition to our team, bringing significant experience and technical knowledge that will complement the highly cerebral approach that Tyler O’Hara brings to the team. He’s got an unwavering desire to be the fastest and reach the top of the box each-and-every race,” said Paul Skarie, S&S President. “Having a second bike in the paddock is incredibly valuable, allowing riders to bounce feedback off of each other and help team mechanics optimize setups on race day.”

RSD: Frankie Garcia & Bobby Fong
For the 2022 King of the Baggers season, the RSD team welcomes veteran racer Bobby Fong. Having competed in flat track and Superbike, and winning 2021’s Road America 2, Fong brings a diverse experience to the RSD team. Piloting Steve Delorenzi’s S&S-built RSD Indian Challenger, backed by Sacramento Mile and SDI racing, Fong will ride alongside fan-favourite and ever-popular privateer Frankie Garcia who makes his return to the RSD Indian Challenger after finishing on the podium in third-place finish in 2020 and fourth overall in the 2021 series.

“We’re stoked to be expanding our bagger racing efforts with Bobby and grateful to Steve Delorenzi for commissioning the factory team to build a second Indian Challenger and trusting us to take it racing this season,” said Roland Sands. “Bobby’s an incredibly talented racer who demands a lot of himself and pushes the limits, and that makes him a perfect fit for RSD. He and Frankie go back a long way and will help each other, while also pushing each other.”

Saddlemen & Lloyd’z Garage: Patricia Fernandez & Cory West
Entering its third year of bagger racing, its second with Indian Motorcycle Racing, Saddlemen called upon long-time v-twin performance shop, Lloyd’z Garage, to handle race craft efforts for its two Indian Motorcycle entries. The tandem of Lloyd Greer and Tim Sutherland will be at the helm of race-team management and mechanics, supporting Patricia Fernandez aboard the Saddlemen Indian Challenger, as she returns to the King of the Baggers grid as the only female racer.

Joining Fernandez, and making his Indian Motorcycle privateer debut, is veteran motorcycle racer Cory West. After finishing in the middle of the pack in 2020, and missing the 2021 season, West will pilot the series’ only Indian Motorcycle Chieftain bagger. Unlike the fixed-fairing, liquid-cooled Indian Challenger, the Chieftain features a fork-mounted fairing and an air-cooled, Thunderstroke engine.

“V-Twin performance is in our blood, and we have been salivating over the idea of operating our own privateer effort in King of the Baggers ever since its debut in 2020,” said Lloyd Greer of Lloyd’z Garage. “When Saddlemen approached us, we jumped at the opportunity and feel extremely honored and grateful to assume responsibilities for their bagger racing efforts. Patricia is a badass racer, and we’re excited to see her compete again, while Cory’s diverse racing background and expertise will provide valuable feedback and insight for Patricia and our mechanics.”

For the 2022 season, MotoAmerica® will host seven rounds of King of the Baggers racing, including the season opener at Daytona International Speedway on March 10-12. For more information on bagger racing, visit MotoAmerica.com.

ABOUT S&S® CYCLE
S&S® Cycle was born from a passion for racing and has spent over six decades building performance for the powersports market. Their unwavering focus on quality, reliability and top shelf power has made S&S® Cycle the absolute leader in high performance on the street and track.

ABOUT MISSION® FOODS
MISSION®, owned by GRUMA, S.A.B. de C.V., is the world’s leading brand for tortillas and wraps. MISSION® is also globally renowned for flatbreads, dips, salsas and Mexican food products. With presence in over 112 countries MISSION® products are suited to the lifestyles and the local tastes of each country. With innovation and customer needs in mind, MISSION® focuses on the highest quality, authentic flavours, and providing healthy options that families and friends can enjoy together. For more information, please visit http://www.missionfoods.com

ABOUT Lloyd’z Garage
Named after the face of Indian performance, Lloyd Greer. Lloydz Garage was created as a Premier service and performance destination residing under the Indian Motorcycle Charlotte and Indian Motorcycle St, Paul dealerships, with a standalone location at the World Famous Buffalo Chip in Sturgis Sd. Lloyd Greer is globally known for his ability to produce incredible power with Indian Motorcycles. The team is supported and headed by partner, Custom bike builder Tim Sutherland and the amazing crew of both performance locations. Lloydz Garage specializes in custom High Performance Indian motorcycles and lives by the motto of “Work together, grow Together”