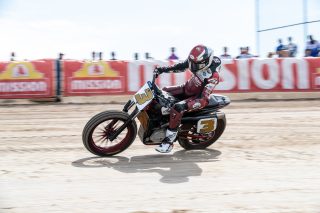 When the 10-second card dropped on the main event, Mees launched off the line to a second-place start and quickly began challenging for the lead. Meanwhile, Bauman started the race in fifth place from the second line. On lap two, Mees took the high line to sneak into the front position and swiftly began pulling away from the field. Unfortunately, a big mistake a few laps later saw Mees almost go into the fence, which allowed the competition to close in on his rear wheel. Vanderkooi took advantage, taking over the lead at the six-minute mark. Despite a slow start, Bauman was relentless in his pursuit to the front of the pack. In the final four minutes, Bauman crept to the inside of his teammate to take over second and tuck in behind Vanderkooi. Throughout the late stages of the race, an intense game of cat and mouse ensued as Bauman and Vanderkooi diced back and forth and meticulously maneuvered their way around lappers. Bauman continued to ride masterfully, sliding to the inside of Vanderkooi to take over the lead with only 30-seconds plus two-laps remaining, ultimately taking the checkered flag and the win. This victory marks the former two-time champion’s second of the season.

“This is a huge win for Briar [Bauman]. He’s been struggling a bit over the past few rounds so it was great to see him fight through the pack tonight. This victory also puts him right back in the thick of the championship chase so hopefully he can continue to carry this momentum through the second half of the season,” said Gary Gray, Vice President Racing, Service & Technology for Indian Motorcycle. “We could not be more proud of our team and all the Indian Motorcycle riders to come away with a podium sweep. I’m very impressed with Jarod’s [Vanderkooi] effort. He was so close to pulling out the win.”

Mees continues to lead the championship chase with a 16-point advantage, while Bauman’s win moved him up one spot in the standings, now tied for second overall with 140 points.

The 2022 AFT season will continue on Saturday, July 16, at the Peoria TT in Peoria, IL.