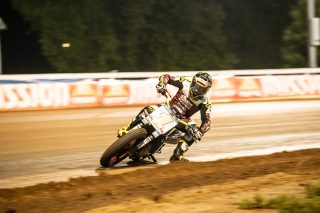 It was an exhilarating weekend of racing for Indian Motorcycle Racing, presented by Progressive Motorcycle Insurance, with reigning SuperTwins Champion Jared Mees rebounding after a second-place finish at Red Mile I to come away with an impressive win the following night at Red Mile II. Mees’ victory extended his points lead to 109 in the championship standings, 22-points ahead of second, and gives Indian Motorcycles their fourth overall win for the 2022 American Flat Track season.

The success over the weekend is all the more impressive, considering new regulations imposed by American Flat Track that require teams running the FTR 750 to run a 34-millimeter restrictor plate. This ultimately inhibits the FTR 750’s ability to make power in stark contrast to competitor bikes for whom the restrictor plates are not required.

On night one of the Red Mile doubleheader in Lexington, Kentucky, Mees fell short to series rookie Dallas Daniels in a nail-biting battle that lasted throughout the entire 14-minute plus two-lap main event. Mees and Daniels maintained a too-close-to-call position for a majority of the race, swapping the lead spot multiple times. On the final lap, Mees made what he thought would be the race-winning pass, but Daniels had different plans, blasting by the reigning champion to cross the finish line a mere .008 seconds in front of Mees.

Mees’ true champion spirit was on full display the next night when he returned in front of another sold out crowd for a rematch at Red Mile II. Right from the start it was Daniels and Mees leading the pack again, with Davis Fisher eventually joining them to make it a three-way fight for the top spot. In an explosive fight to the finish, Mees made a last-minute charge, storming past Daniels on the final lap to take the checkered and win. The win marked Mees’ 23rd mile victory of his career, tying him for fifth all-time in the discipline.

“It was an exciting two days of racing for Jared [Mees] and the whole Indian Motorcycle team, especially considering the enormous challenges we have been forced to overcome with AFT’s newly imposed restrictor plate limitations for our bikes,” said Gary Gray, Vice President Racing, Service & Technology for Indian Motorcycle. “It’s really disheartening to see our FTR 750 so radically debilitated in comparison to the competition, but it makes the incredible efforts of Jared and Davis all the more impressive, and we could not be prouder of them and their teams for the skill and determination that ultimately put us on the podium.”

“The first couple of laps, Dallas [Daniels] and I had a pretty comfortable lead,” Mees explained of his Red Mile II performance. “That allowed me to hold back a bit, pacing him to get a sense of where I could make a move. There’s no room for error in that situation. When you decide to make your move, you’ve got to make it count, and that’s exactly what I was able to do. It felt good though to get the win, especially after coming so close in round one.”