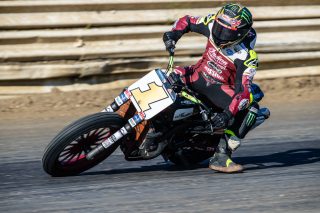 Indian Motorcycle Racing, presented by Progressive Motorcycle Insurance, secured its sixth consecutive American Flat Track (AFT) Manufacturer’s Championship, while its Wrecking Crew factory rider, Jared Mees, took home his eighth career Grand National Championship. Mees’ second and third-place finishes at the Volusia Half-Mile I & II finale were more than enough to cement his spot atop the leaderboard and retain the No.1 plate. Meanwhile, teammate Briar Bauman’s double podium propelled him from fourth to second in the final standings – awarding the Indian Motorcycle factory team the top two SuperTwins spots for the fourth year in a row.

While new 2022 rule changes were implemented to restrict performance of the Indian FTR750, the Indian Motorcycle factory team rose to the occasion and hit every curveball thrown its way. Mees credits his team for a phenomenal job all year, as they didn’t have a single a mechanical failure. Mees finished with three wins and nine additional podiums. Bauman, who was on a hunt to retake the No.1 plate from Mees, was competitive all year until a P16 at Cedar Lake Short Track II dropped him back in the leaderboard standings. While a shot at the championship may have been out of reach, Bauman’s fierce competitive nature led him to a third and second-place finish, respectively, and firmly planted him second overall for the second year in a row.

“This year brought new challenges unlike any other. Our Manufacturer’s Championship and Mees’ title are a testament to the team’s resiliency and hard work,” said Gary Gray, Vice President Racing, Service & Technology. “And, of course, a personal congratulations to Jared on his eighth championship. When we returned to the sport in 2017 and Jared joined the Wrecking Crew, he shared his career goal with us, so to be sitting here, six years later, and him just one title shy, is truly amazing.”

Having won four of the last six SuperTwins championships aboard the Indian FTR750, Mees is now just one shy from his personal career goal to reach Scottie Parker’s record of nine championships. Mees has more than 60 career wins and multiple records.

ABOUT INDIAN MOTORCYCLE®
Indian Motorcycle is America’s First Motorcycle Company®. Founded in 1901, Indian Motorcycle has won the hearts of motorcyclists around the world and earned distinction as one of America’s most legendary and iconic brands through unrivalled racing dominance, engineering prowess and countless innovations and industry firsts. Today that heritage and passion are reignited under new brand stewardship. To learn more, please visit www.indianmotorcycle.eu