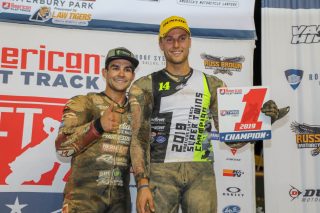 Shakopee, Minn. (September 24, 2019) – On a night where Murphy’s Law seemed to be in full effect, Indian Motorcycle Wrecking Crew Rider Briar Bauman overcame enormous adversity to realise his lifelong dream of capturing a Grand National Championship (GNC). After a five-rider crash early in the main that sent him into the air fence, Bauman was forced to restart from the back of the pack, grinding his way through the field to a third place finish at the Minnesota Mile to capture his first American Flat Track (AFT) Grand National Championship and the third consecutive GNC for Indian Motorcycle Racing. Reigning AFT Twins Champion Jared Mees secured his seventh win of the season but will reluctantly hand over the No. 1 plate to his factory teammate and good friend, Bauman.

Bauman’s crew rose to the occasion when it mattered most, racing against the clock to repair his Indian FTR750 in time for the restart and keep Bauman’s night from an anticlimactic ending. But the drama didn’t end there, as a second accident caused further delays and reduced the 25-lap Main event to just 15. Bauman’s ability to remain focused against all odds and make his way to the front of the pack within the shorter 15-lap format was indicative of the grit and determination that has marked his entire Championship season.

Following the race, Mees put his competitive interests aside in favour of friendship, celebrating with Bauman by sharing his well-deserved victory lap. The dramatic two-up victory lap left Bauman with tears of joy, as he celebrated with friends, family and teammates.

“I’ve dreamed of this my whole life,” said Bauman in his podium interview directly following the race. “I used to have posters of Bryan (Smith) and Jared (Mees) in my room growing up. And to win it… I can’t even put it into words.”

Since Indian Motorcycle’s return to professional flat track racing in 2017, the brand has been perfect, capturing all three Manufacturer’s Championships and all three AFT Twins titles. Mees won in convincing fashion in 2017, capturing 10 wins and setting an AFT record of 17 podium finishes. In 2018, with many of the sports privateers turning to the Indian FTR750, Mees repeated and retained the No. 1 plate. Now with Bauman’s first GNC, Indian completes another historic trifecta.

“Bobby Hill and Bill Tuman, the original Indian Motorcycle Wrecking Crew, won three Grand National Championships in 1951, 1952, and 1953,” said Gary Gray, Vice President – Racing, Technology & Service for Indian Motorcycle. “This championship is a tribute to them and the resiliency of the brand to get knocked down, only to get back up and return to greatness—just like Briar Bauman did this weekend.”